An Orthodox Historian Finally Acknowledges: There is No Evidence for Nazi Gas Chambers

Robert Faurisson was educated at the Paris Sorbonne, and served as a professor at the University of Lyon in France from 1974 until 1990. He was a specialist of text and document analysis. His writings on the Holocaust issue have appeared in four books and numerous scholarly articles, many of which have been published in this Journal.

This essay is a translation and adaptation of a text written in September 1996. We regret the delay in publishing it.

Born in 1939, Jacques Baynac is a French historian who is the author of several books.[1] A scholar whose sympathies lean to the left, he harbors a definite hostility toward revisionists (whom he calls “deniers”), and particularly toward revisionist writer and publisher Pierre Guillaume and myself. For years he affirmed the existence of Nazi homicidal gas chambers.

In 1996, though, Baynac acknowledged in two lengthy articles published in a Swiss daily newspaper that, taking everything into account, one is forced to admit – even if it is “as painful to say as it is to hear” – that the well-known “testimonies” are not sufficient proof of wartime homicidal gas chambers, and that it is simply not possible to prove, scientifically, that the homicidal gas chambers actually existed.

Given this lack of any direct proof, he continued, it will now be necessary to seek an indirect proof. Because one cannot prove that Nazi gas chambers existed, he goes on to write, it will instead be necessary to prove that it is impossible that they did not exist! Specifically, he writes: “If scholarly history cannot, because of the lack of documentation, establish the reality of a fact, it can, by means of documentation, establish that the unreality of this fact is itself unreal.”[2]

The Evasion of Historians

In the first of these two articles, Baynac begins by deploring France’s anti-revisionist “Fabius-Gayssot” law of July 13, 1990, which he says allows “the deniers’ sect” to use the courts as podiums for their views. He notes that this law has been criticized by Claude Imbert of Le Point magazine, historian Pierre Vidal-Naquet (who has said: “I am ready to kill Faurisson, but not to pursue him in a court of law!”), Madeleine Rebérioux (former president of the “Human Rights League”), anti-revisionist attorney Charles Korman, and several parliamentary deputies of the Gaullist RPR party.

Baynac affirms that the revisionists/deniers have plenty of reason for rejoicing, especially since the Abbé Pierre affair “changed the atmosphere” in their favor. Baynac also notes that among the anti-revisionists, “disarray has given way to consternation,” that historian Pierre Vidal-Naquet “is grieved,” that the prominent French-Jewish intellectual Bernard-Henri Lévy “is beside himself,” that Pierre-André Taguieff “is frightened,” and that the front cover of an issue of the French magazine L’Événement du jeudi (“The Thursday Event”) proclaimed “The Victory of the Revisionists.”

Baynac denounces Jorge Semprun, an intellectual and former deportee, for having irresponsibly “murdered” a book by Florent Brayard that attacks French revisionist writer Paul Rassinier. Baynac believes that among Leftists there has come into being a “paranoia,” a “witch-hunt” (in the words of Jean-François Kahn), and a “disastrous chaos.” He notes that Simone Veil and Dominique Jamet share his dislike of the Fabius-Gayssot law, and that “one refuses to debate” the revisionists.

Baynac recalls the declaration by “34 reputable historians” published in the prominent French daily Le Monde on February 21, 1979 – a stupefying declaration that responded to but did not answer my challenge, which had appeared earlier in the paper, calling for an explanation of how, technically, the magical Nazi gas chambers were supposed to have operated. In this regard, Baynac writes of the “evasion” of historians in general, and goes on to declare that “the historians have retreated.” 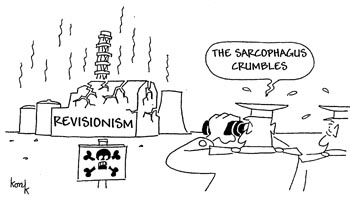 REVISIONISM: "The tomb is cracking!" In this cartoon, from the French weekly "National Hebdo" (May 9-16, 1996), "Konk" notes the enduring vitality of Holocaust revisionism, in spite of repeatedly being pronounced dead.

Neither Documents, Traces, Nor Proofs

In the second of his two articles, Baynac deplores the fact that anti-revisionist historians have trusted Jean-Claude Pressac, a pharmacist and “amateur historian,” who now concludes that the number of Jewish and non-Jewish dead at Auschwitz amounts “to a total of 600,000 victims.”[3] Baynac derides historian François Bayrou, France’s Minister of National Education, who, conscious of the difficulties in trying to prove the “Holocaust” genocide and wartime homicidal gas chambers, advocates recourse to a “less burdened” historical method. Baynac sees in this a “light historical concept.”

Baynac believes that Nazi gas chambers existed, but thinks that those who have tried to prove their existence have overly employed an “ascientific” methodology, rather than a “scientific” one. In this “ascientific” method, he goes on, “testimony prevails,” while in the “scientific” method documents prevail. However, he adds with regret, one is able only to ascertain “the absence of documents, traces, or other material proofs.”[4]

Baynac recalls the admission made in 1988 by Jewish-American historian Arno Mayer, who teaches at Princeton University: “Sources for the study of the gas chambers are at once rare and unreliable.”[5] Baynac goes on to say that “we do not have available indispensable elements for a normal undertaking of the historical method,” and that “one must remain silent for lack of documents.” He concludes with a remarkable concession: “it is necessary to recognize that the lack of traces involves the inability to directly establish the reality of the existence of homicidal gas chambers.”[6] When he writes “the lack of traces,” he means, as already mentioned, “the absence of documents, traces, or other material proofs.”

This is an example of admitting a present-day inadequacy while postulating an act of faith for the future. Baynac is naive. He believes that because so many historians have emphatically affirmed the reality of the “Holocaust” horrors and the homicidal gas chambers, and so many survivors have claimed to have seen them, therefore they undoubtedly existed. He does not realize that, with time, one discovers that the writing of history is full of histories that are more or less imaginary. 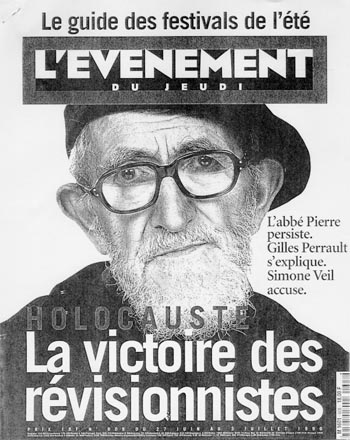 "Holocaust: The Revisionists' Victory" proclaims the French establishment weekly magazine "L'Evenement du jeudi" ("The Thursday Event") on the front cover of its issue of June 27-July 3, 1996. This issue appeared during the national furor over a scholarly revisionist study by Roger Garaudy, "Les mythes fondateurs de la politique israelienne" ("The Founding Myths of Israeli Polio tics"), and the support he received from a widely respected priest, Abbé Pierre (also shown on the magazine's front cover).

Baynac joins, as it were, the “34 reputable historians” who, as already mentioned, in 1979 published one of the most monumental pieces of nonsense of French academic life: “It is not necessary to ask oneself how, technically, such a mass murder was possible. It was technically possible because it happened.” Baynac thus adds his name to those of the 34 orthodox scholars who, without intending it, were obliged to agree with the revisionist historians on several important issues. This inevitably raises a question: how can judges continue to condemn revisionists for contesting a crime that, as Baynac now acknowledges, has not been proven?

It is quite clear that the “Nazi gas chambers” are ever more embarrassing for those who uphold the “Holocaust” thesis of Jewish extermination. As early as 1984, Pierre Vidal-Naquet warned friends who were already attempting to abandon the “gas chambers” that to do so would be “to capitulate in open country”[7] And in 1987 a periodical hostile to revisionism published a letter by two French-Jewish teachers, Ida Zajdel and Marc Ascione, suggesting that the Nazis had faked their confessions, and only mentioned gas chambers in order to plant “a delayed action ‘bomb’ against the Jews, an instrument of diversion and, why not, of blackmail.”[8]

There are many other examples worth citing, but I will content myself here with citing just three recent ones: that of Elie Wiesel (in 1994), that of a Dutch professor of Jewish-Polish origin, Michel Korzec (in 1995), and finally, that of the Jewish-American historian Daniel Jonah Goldhagen (in 1996): 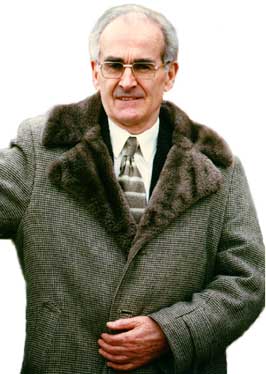 A Swiss Newspaper Sets An Example

In recent years I have described at various times, in samizdat essays and in interviews recorded by Ernst Zündel in Canada, this evolution by the “exterminationists” regarding the “Nazi gas chambers.” In a text I wrote on September 22, 1993 (and which I intend to publish in my forthcoming book), I predicted that one day organized Jewry eventually would be obliged to give up the lie about Nazi gas chambers, while at the same time still insisting that “the Holocaust” is an irrefutable truth. Consistent with this, the US Holocaust Memorial Museum in Washington, has decided not to provide any physical representation of a German homicidal gas chamber (except for a door of a delousing gas chamber and an absurd and “artistic” model).[13]

The two 1996 articles by Jacques Baynac in the Swiss daily paper are only a stage in this metamorphosis of official historiography. Baynac’s articles confirm that, for quite some time now, historians have broken with the facade of unanimity. Step by step, historians are rejecting the simplistic conclusions of the Nuremberg Tribunal regarding gas chambers and genocide.

When French judges declare that challenging the existence of Nazi gas chambers is to challenge “crimes against humanity” (which the genocide of the Jews would have been), they are correct. However, if there is no longer any proof of a specific murder weapon, logically there is no longer any proof of a specific crime. This conclusion, rather embarrassing for the judges who dare to condemn revisionism, follows inevitably from the position taken by Baynac, a position that, once again, is not in any way peculiar to him but represents a general trend in orthodox historiography. Baynac is simply saying out loud what his colleagues have been thinking in silence.

In publishing these two articles by Baynac, Le Nouveau Quotidien of Lausanne, normally so hostile toward revisionism, has shown both discernment and respect for its readers.[14]

Jacques Baynac: “There are no proofs, yet I believe.”

Robert Faurisson: “There are no proofs, therefore I refuse to believe.”

For the first: freedom of expression.