German Forced Labor and its Compensation

The public discussion about the compensation of former concentration camp inmates and forced laborers is not only characterized by covering up facts and raising legends and horror stories to reality. It is far more marked by a partiality and one-sidedness which can hardly be surpassed. As is customary, it is also here again overlooked, that the German people, which has had to pay the bill over the past five decades for the so-called reparation, has itself suffered far more under the unjust treatment by the victors and their Allies. Described below is the injustice of the internationally illegal deportation and forced labor of millions of German men, women and children – uncorrected and not even publicly recognized as such – and a minimal restitution for this injustice is calculated.

1. The Burden of “One-sidedness” in the Historical “Coming to Terms with the Past”

Winfried Martini began the introduction of his informative book Der Sieger schreibt die Geschichte (The Victor Writes the History) with the sentence:[1]

“It is part of the fascinating phenomena of our time, to what extent a military defeat influences the historiography and the general awareness of history and how the victor is spared from moral judgments.”

This experience belonged in the 20th century to the everyday life of the Germans. A century, which was not “The German century”[2] according to Prof. Eberhard Jäckel, but as Prof. Arnulf Baring correctly questions:[3]

“Was our century not coined by the rise of the United States to finally become the only world power? [...] However one likes to twist and turn it: [...] it was not at all ours, neither in good nor in bad.”

But, united in “evil,” an antiGerman coalition was created subsequent to the time of the resignation of Otto von Bismarck in 1890, perceived secretly, with an unsurpassable destructive intent and goal, to break up the German Reich of Bismarck, to destroy the German people for all time, and to remove the German economic competition from the world for good. In order to achieve this goal, every means was right.

The central figure of this century with a universal mission was the long serving American President Franklin Delano Roosevelt (1882–1945), who was acting minister of the navy from 1913–1920, and President of the United States of America from 1933–1945, and who had great influence during the times of both world wars. He organized the largest war machinery in world history,[4] which rolled over the 20th century during two World Wars (also called the “Third Thirty Year War”), regardless whether the rest of the world desired this or not. His troops are still in Germany at the beginning of this 21st century, the Federal republic of Germany is still loaded with numerous dictates, and the victor writes the history.

The latter overloads all Germans with clear one-sidedness of guilt and debt, demands and payments, including compensation for forced labor done in Germany in large numbers, demanded or sued for in courts. Scientific reviews of the prehistory and the actual evolvement of world events during the twentieth century show that it is untenable to place on Germany the exclusive war guilt with all the demands and legal violations resulting from it.[5]

Besides the fact that the saying “the first victim during a war is always the truth”[6] remained unfortunately as true for Germany after the end of the war as it is today, the general concealment of their own guilt by the victorious powers in connection with the ongoing cynical-hypocritical blaming of Germany indicates an abyss of human failure, which cannot be a base for a peaceful future and will sooner or later be caught up by the historic truth! The German poet and playwright Friedrich Hebbel (1813–1863) noted rightly in the first volume of his well known Tagebücher?[7]

“There is only one sin, which can be committed against the whole of mankind with all its generations, and this is the falsification of history!”

From hundreds of testimonies, documents, and scientific works, which attest against the sole guilt of Germany for both World Wars, only two are mentioned here. The U.S. historian Prof. H.E. Barnes noted with regards to the question of war guilt of the First World War:[9]

“Of all warring powers Germany was the only one which carries no blame at all for the beginning of the war.”

And the Polish States Secretary of the Foreign Ministry, Count Szembek, said on April 11, 1935, to U.S. ambassador W.C. Bullitt:[10]

“America waged war [on Germany] twice within the period of only one generation, because the American presidents were convinced that the dominance of a single hostile nation in Europe would be a threat against the American security and economical interests. Nothing has changed of this reality.”

In an interview with the Berliner Zeitung on January 3, 1997, author Gore Vidal, a cousin of former U.S. vice president Al Gore, explained frankly:[12]

“We started in 1945 to conquer the globe. NATO was not established to protect the poor Europeans from the Russians, but to obtain total control over Western Europe.”

Today, Germany is still without a peace treaty, and it feels the burden and provocation of this restraint! This situation also explains the continuous demands for compensation from all over the world against Germany, which herself does not oppose this at all.

2. There were also Millions of German Forced Laborers!

Contrary to the subject “Forced Labor in the Third Reich,” there are hardly any investigations about “Forced Labor of German POWs and Civilian Internees in Foreign Countries” (see the tables).[13]

It is shocking to observe the one-sidedness, with which topics like war guilt, the German Wehrmacht, plans for world domination, and now also the subject of “Forced Labor and Compensation” are dealt with. It is conspicuous to observe the missing attempt to view the specific topic of “forced labor” in a contemporary frame in the sense of similar events in almost all countries, which participated in the war. The starting point is always the claim that Germany is exclusively guilty for everything, even though this has been refuted for quite some time now. Most historians have still not noticed major changes of the historiography on the world wars.

The army of German forced laborers of almost twelve million German soldiers and 1.7 million deported German civilians in twenty different countries, sometimes with forced stays of more than ten years in these countries, appears to them to be no subject at all. They talk about one of the biggest Nazi crimes, of which reparations have not yet been made, “although already during the Nuremberg trials one of the four main charges was ‘slave labor’.”[14] But nobody seems to notice that the judges of these tribunals come from countries, where such “biggest crimes” were unfolding simultaneously.

Or take Prof. Dr. Ulrich Herbert (Freiburg, Germany), who, in a full page essay with the title “The Million Army of the Modern Slave State. Deported, worn out, forgotten: Who were the forced laborers of the Third Reich, and what was the fate ahead of them?” writes thoughtlessly:[15]

“The National Socialist deployment of foreigners between 1939 and 1945 is the biggest case of forced mass utilization of foreign labor in history since the end of slavery in the nineteenth century. By the late summer of 1944, 7.6 million foreign civilian workers and POWs were officially registered as employees within the area of the  ‘Großdeutsche Reich,’ who were mostly brought into the Reich by force.”

This article gives the impression that the “slave state of the Soviet Union” did not exist at all, where Siberia from the Ural Mountains to the Bering Strait became a gigantic international cemetery of the dead from more than 28 nations.[16] Also during the time in question, from 1939 to 1945 and until 1956, the “Soviet foreign employment,” which included the German POWs and civilian deportees, continuously “employed” a two-digit million number. These slaves had to perform their slave labor in more than 2,000 work and death camps, partly under the most primitive living and camp conditions (e.g.Workuta).

There were still more than 20 million forced laborers in the fall of 1955.[17] After the war, the “people’s democracies” of the east reached a record high in deportation for forced labor. Secret Soviet orders existed to arrest, for example, 27,000 Germans who were able to work below ground in the area of communist East Germany and to exchange them for German POWs who were no longer able to work in the Soviet Union.[18]

Of the Western powers it was especially France, which employed German POWs against the international laws for forced labor. Thousands of Germans perished or suffered horrible mutilations in French captivity while clearing mines.

The real gain from reparations did not come from Germany’s industrial installations, noted the US newsmagazine Life, “but from the German brain and the German research results.” Scientists were partly “forced with point blank pistols or with threats of war crime trials” to work for the victors. There were 523 German scientists in the USA in 1947; their number was to be increased to 1000.[19]

3. Summary and the Request for Equal Treatment of German Forced Laborers. 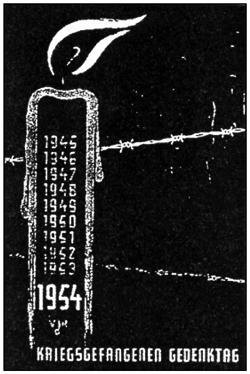 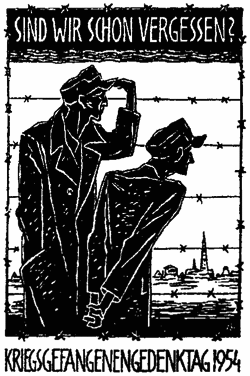 The whole forced labor after the war, which amounts to at least 90 percent of the work shown here, was an infringement of international law unprecedented in scale in the history of mankind. To this day, the forced labor issue has unfortunately not been completely evaluated by any German public authority. It is here for the first time correctly displayed from an economic point of view.[20]

The German forced laborers, POWs, and civilian deportees had to produce therefore almost ten times the yearly output in 1985 of all the workers of the West German industry!

The forced labor of the civilian deportees from the Soviet occupied areas of the German Reich proper and Austria could not be determined. There were more than 100,000 Germans who were deported for political reasons and who were almost without exception murdered during imprisonment. The same goes for the more than 100,000 people, who were held in Russian concentration camps of the Soviet occupied zone. The German media reported during a visit of former head of State of communist Germany Erich Honecker in West Germany that in Buchenwald concentration camp alone 80,000 prisoners were murdered after 1945 by the Soviets or their German communist lackeys.[22] A total of more than ten percent of the German population had to perform forced labor for years against all international laws.[23]