When I first heard of thought crimes, about a decade ago, I thought it was just one of those urban myths or conspiracy theories which people repeat mantra-like here and there. No democracy in the 21st century would dare jail dissidents for saying what many don’t want to hear. Intellectual freedom existed for me as an unquestionable fact. I really thought we all were free to say and think unpopular ideas. This was unshakable ground for me.

Well, I was very naïve, and of course also very new to revisionism.

Later I learned most importantly that using it or fighting for it comes at a price. Those who have come to question the orthodox Holocaust narrative openly are among the most undesired people of society. They have lost their jobs, friends, their respected lives and in many cases they have been persecuted and jailed for expressing opinions contrary to the holocaust orthodoxy. For old timers in the revisionist scene, this is an old hat, yet nothing to pass by lightly.

Sylvia Stolz, a criminal defense lawyer, is one of those cases where the effects of legislation, in this case German in nature, have been sadistic and immoral regarding her freedom of speech rights. She first appeared on the revisionist scene as a member of Ernst Zündel’s defense team during his free speech trial in Germany in 2006/2007. Due to her confrontational defense style, she was eventually banned from defending Zündel and even physically carried out of the court room. Zündel was convicted to serve a five-year prison sentence for revisionist statements he had made online and in print, even though those statements were and are perfectly legal in the US and in Canada, from where he had distributed his statements.

Stolz, on the other hand, was put on trial for written statements she had made while defending Zündel in court. In January 2008 she was convicted under some of the same charges that had been used against Zündel. She was sentenced to a 3½-year prison term.

But the story does not end there. On November 2012 Stolz was a guest speaker at the Anti-Censorship Coalition’s 8th conference held at Chur, Switzerland, to which she had been invited by Ivo Sasek, the founder of this Swiss association. Her presentation was not about history but about freedom of speech.

In her speech she talked about banned speech and the Holocaust problem in court—mainly in German courts. She says, and I quote from a transcript of her talk: 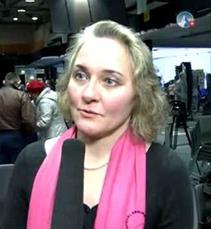 “…banned legal defense within the area of ‘holocaust denial.’ Much could be said about this, one hour is far from sufficient. My job here is to omit that for which there is no time. But there are certain points, which I think are essential to emphasize. First of all, it must be said that the principle of the ‘defined penal code’ has not been fulfilled. It has been outright violated. This principle dictates that the accused must be allowed to know what he did wrong. And what he should have done otherwise. If someone takes a bicycle that does not belong to him, then this of course constitutes ‘theft,’ as we all know.

In cases of libel, where a person says something negative, causing reputational damage, then the question before the court is whether what was said is true or false. And if true, it does not constitute ‘libel,’ because in theory one is allowed to speak the truth. In the case of ‘holocaust denial,’ the first problem we are faced with is that the holocaust isn’t defined anywhere. That is the problem of a ‘defined penal code.’ An authoritative definition cannot be found anywhere.”

I am not a lawyer, but the point she makes surely is an interesting philosophical problem, if not an outright legal vacuum. (See the transcript at pastebin.com/xBDxkLcM.)

Almost a year after her speech, in January 2013, the Swiss lawyer Daniel Kettiger filed a criminal complaint against Sylvia Stolz and Ivo Sasek for violating the Swiss anti-racism law, Section 261bis of the Swiss Penal Code. Kettiger complained that Stolz had claimed that the Holocaust had never been proved by a court of law. This is true, of course, because courts don’t prove entire historical events—they merely deal with individual crimes. There are, of course, more than a thousand court decisions in Germany alone where alleged individual crimes had been dealt with which are said to have been a part of what we call “the Holocaust,” but there is no court decision by any court exactly defining what “Holocaust” or the “NS genocide against the Jews” means exactly.

As a result of this complaint, Sylvia Stolz was again indicted—in Germany–—and put on trial in Munich in February 2015, resulting in a 20-month prison term for her free speech presentation of 2012. Although she committed her “thought crime” outside Germany, German case law considers as the crime scene not the location where a statement was made, but where people could potentially hear or read it. In today’s internet world, this means that German courts are empowered to prosecute anyone who has violated German censorship law, no matter whether that violation occurred in a German court room or on the far side of the moon, as long as the offensive statement was posted online or delivered to Germany in any way, shape or form.