A Closer look at a German "Atrocity Photo" 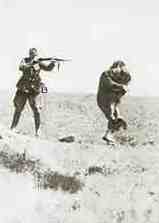 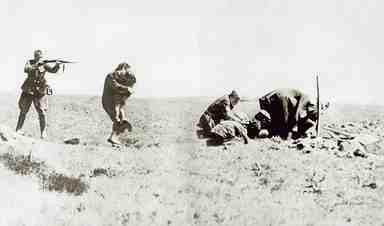 The following list is of various versions of the famous photograph which shows (in its cropped version) a German (?) soldier sighting in his rifle in the standing position, allegedly about to shoot a woman who is clasping a baby to her breast and facing away from him.

The uncropped version gives a different scenario, and the comments below are offered after brief examination.

Many thanks to Mark Weber of the IHR (Institute for Historical Review) for locating copies of the photo and sources where it has been published. People seeking specialized info like this should not hesitate to call on IHR for help. They have the double treasures of a large library of reference materials, and Mark Weber's impressive store of personal knowledge and files regarding the Holocaust and WWII history in general, particularly from the German point of view.

This is an evolving set of photos and comments, revised as better copies were obtained. Arrangement is chronological, newest photos and comments at the top. All graphics are JPEG format, 300dpi, varying degrees of accuracy, including a ridiculous 8.6 MB version.

The photo used to be displayed on the USHMM Website, but has been (re?)moved since (http://www.ushmm.org/kovno/mass/mass.htm, 3/20/99)

From Time-Life, WWII, 1967, with a slice missing in the centerfold that will be added later. Corrects several misassumptions above:

My take on this is that the woman was added to a photo that included the items on the right and may or may not have included the soldier. What is fairly certain, even it the whole thing is real, is that he's not shooting at the woman and child.

All the pictures are in JPEG or jpg format, 300 dpi, with quality levels varying from 100% to 25% for "reduced quality." The original scan was made on a German language brochure using blue ink and thin paper, criticizing Goldhagen and Spielberg. The thin paper caused the letters on the reverse side to appear in the sky and no attempt was made to remove them on the first pass. All the pictures with "2" in their address name have had these ghost letters removed. Don't attach any significance to the shape of the horizon line on these, it just reflects the hand-drawn selection of the area that was modified. Ditto any fine distinctions of the profiles of the people in the sky area, ignore the fine area close to them that has a slightly different texture as that is left over from the modification.

Among the many books in which this photo has appeared:

"A member of the Einsatzgruppen targets a mother and child at point-blank range. Women were often ordered to hold their children so that one bullet could do the work of two." – This Century

A Further Modified Version of the Cropped Picture

The cropped picture, as shown on page 260 of This Century has shadows added to the rifleman and the woman, shadows that go the wrong way, directly into the source of light clearly indicated by both the uncropped version and also by features in the cropped photo to which they were added. This explains the dark blobs that appear at the bottom of the cropped version in the first listing above. With these shadows added, the perspective is shifted so that now it appears even more as if the soldier is aiming at the woman's head. Also, with the shadow now around her feet it becomes even more obvious that the woman is not standing on the ground because of the distinct white border at the bottom. From the poor quality photocopy I have of the uncropped picture shown in Gilbert's book, the shadows appear to be shown there as well. An attempt will be made to access the book and scan in the photo from there.