Belzec/Kola – Going to Extremes to Sell the Lie 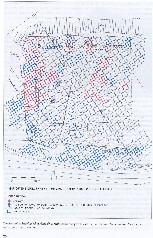 Map of drilling and excavations

About now would be a good time to return to think about Kola's core samples and what he says they found. He says they took core samples every 5 meters (16 feet). He shows his sketches with the various designations of layers and such. Going by all the info available, including Kola himself going on about how all the ashes were on top and such it seems like any core samples wouldn't have been able to show any kind of stratigraphic order.

The last 7 pages of the book are dedicated to photos of various artifacts said to have been found. Kola along the way says that Tregenza had found one by way of a metal detector.

Below each photo and attached to the description we are told where the stuff was found. "Probing excavations" account for most of them, one "metal detector" and a couple of "lose finds" evidently to mean just laying on the surface.

The first photo shows a bunch of rusted up horse shoes. Then a photo of many rusted keys and four locks. Then a cluster of rusted spoons. Then more tableware laid out in two rows. The next photo some corroded scissors. Then the next more locks and keys. Then photo of broken bottles. Next more glass pieces. Broken up pottery shards follows. Then a display of iron objects. Next, voilà, photo of plastic plates with Stars of David. That's followed by three photos of cigarette cases. Then two photos of "lose find", which would be two silver broaches. Then a small pin, a pendant with, voilà, a Star of David on it. The next number of photos are of Bayer aspirin boxes, combs, piece of mirror, soap boxes and buttons, hair brush, phials and a number of other things. 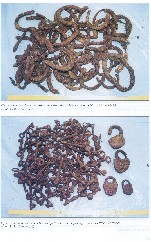 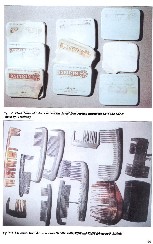 
Nothing much to say about all that except all the artifacts have been washed off and none shown 'in situ'. When the first 'Folsom point' spear head was found in the United States the finders couldn't get anyone to accept it and they had to return to the site from where it was found and find another one. The original point had been discovered in and among the bones of a ancient bison kill by Paleolithic man. When they found another spear head in among the bones of the same site they cut out a large section of the matrix with the spear point still embedded 'in situ' and presented it for the documentation. Showing a archaeological discovery 'in situ' is a recognized procedure for maintaining credibility of a find. For any of the stuff we see in Kola's book we don't see one single example of anything in place as it was being discovered.

The whole idea of mass extermination taking place at Belzec is totally nonsensical.

From the fact that the site was just outside of a town. That it was located on a slope with an opposing slope as a bleacher stand.

That the Germans first buried hundreds of thousands and then dug them up a few months later after they suddenly realized they could lose the war and be exposed.

That Polish citizens, evidently knowing about the crime went in by the horde to dig it all up again to find treasure even though the Germans were still in control of the area.

Maybe the most nonsensical thing about the Belzec story, or any other camp would be that the Germans could have covered up the crime according to what we get from the likes of Kola. Going by Holocaust 'facts' the whole thing took place more or less out in the open, just outside of a town and everyone knew about it.

It's not a matter of it couldn't have happened but did it happen according to Holocaust dogma. A close look at all that would have been involved would make it all appear at the least totally improbable and boarding on impossible. Like what the hell would the Germans be thinking after they went in and straightened everything out after the Polish citizens went in for the first time?

Here we have this book with all the high falootin names and institutions attached and yet one little kid with a toy plastic shovel could show the whole thing to be the total nonsense it is.

It must have been a very painful endeavor for Mr. Kola to have to agonize through it all, making up archaeological accounts, keeping all the nomenclature straight, drawing schematics of core samples and grave sites and compiling the array of artifacts shown at the end.

It's just amazing to what ends people will go to in order to sling the Holocaust story.