CODOH’s Website has just gotten a whole lot bigger. We are cruising into the New Year carrying Ernst Zuendel’s Internet site—“piggyback” as it were—on the World Wide Web.

Why? Not because authorities in Canada have closed down the Zuendelsite—after all, it operates out of the United States of America. Not because computer whizzes among the Canadian censors have figured out a way to block the Zuendelsite’s provocative contents as they whir through cyberspace—they’re not up to that yet, and may never be.

No, as usual in the continuing persecution of revisionists, truth is stranger than fiction. In late November Ernst Zuendel learned that he was to be summoned before a “Human Rights Tribunal” regarding the “hateful” content of his Holocaust revisionist Website.

While Zuendel has never been prosecuted under Canada’s “antihate” laws (despite being pestered in every other imaginable way), and despite his Website’s location a thousand miles or so from Canada, the powers that be north of our border have found, doubtless after poring rigorously over every jot and tittle of the law, a loophole: Section 13 of Canada’s Human Rights Act, which bans taped “telephone” messages that Canada’s human rights gauleiters deem hateful and inciting.

So now a computer is a telephone (by the logic, evidently, that the Internet and World Wide Web are characteristically accessed via telephone line). Ergo, the next step in the through-the-Canadian-looking glass logic of suppressing freedom and deepfreezing common sense is to safeguard “human rights” by attempting to forbid Zuendel his freedom of speech, i.e. deny him any revisionist input into the Internet, and thus, in effect, hold him hostage—a hostage to Holocaustomania—under threat of arrest, prison time, and thereafter probable deportation to Germany and even lengthier imprisonment, should he continue posting revisionist materials to the Zuendelsite.

Zuendel, defended as ever by his able and courageous attorney, Doug Christie, is of course fighting the misnamed Human Rights Tribunal’s attempts to haul him before its inquisitors. Zuendel has discovered that, needless to say, this latest venture in censorship didn’t arise spontaneously: the two complainants were the Toronto Mayor’s Committee on Community and Race Relations, a harum-scarum, multi-culti gaggle of Holocaustier-than-thou leftists, and—well, well!—Sabina Citron, the alleged Holocaust survivor who has spent the last decade and more making unsuccessful complaints regarding Zuendel’s spreading of “false news” (leading to two memorable but costly trials), defamation, etc.

Clearly the complainants had little trouble in catching the willing ear of Harvey Goldberg, Policy and Planning Director of the Canadian Human Rights Commission, and his boss, CHRC Chairman Max Yalden (who as you read this will have moved on to the United Nations Human Rights Committee—perhaps his appointment signals a move from the UN’s pathetic efforts at stopping present genocides to penalizing doubts about past ones). Human Rights Commissar Yalden signaled his impartiality to a Canadian newspaper, well before the tribunal was scheduled to open: “I’m as much interested in protecting freedom of speech as the next guy and I believe in a free and open debate in a democratic society like Canada... I don’t think Zuendel is engaged in free and open debate. I think he’s engaged in inciting people against Jews, and it’s on that basis we’re proceeding.” (Hamilton Spectator, November 23, 1996)

If Ernst Zuendel loses before the Canadian Human Rights Tribunal (never bet against him), the CHR Commission may well issue a cease-and-desist order, bound to his person, making him liable for anything he does personally to provide material to his California-based Website—or has already provided. This is where CODOHWeb. and other revisionist sites, have decided to back-up Zuendel before the horse gets out of the barn.

You will recall that early last year, after the German government had attempted to block Internet access to the Zuendelsite. a variety of U.S. Internet sites, some of them at leading universities, stepped forward to help Zuendel get around German cybercensorship by “mirroring” (electronically “copying” and making available) the contents of his site on their own—even though most of them rejected his revisionist historical views. Lately, however, fewer of last year’s devotees of Internet freedom seem to want to get involved in helping Zuendel. At the same time, the contents of the Zuendel site include a vast trove of revisionist scholarship and data (much of it, the censors should take note, accumulated or—like the Leuchter Report, for instance—generated during past attempts to muzzle free speech on the Holocaust in Canada).

Should Zuendel be gagged by the Rights Police, CODOHWeb and Greg Raven of IHR will have already “mirrored" the full contents of the Zuendelsite onto our sites, so that Zuendel’s priceless archive of revisionist data is in place well in advance of any court decision, posted on reliable, friendly Internet sites that will carry on in cyberspace with, shall we say, visceral, as well as cerebral intelligence. This is Holocaust and other revisionist material that Zuendel and his aides—in particular Dr.

Ingrid Rimland. who operates the Zuendelsite in California—have been making available to a worldwide audience. And. even if the end of Ernst Zuendel’s active participation in his own. America-based site is decreed by the Human Rights Tribunal, we are still only at the beginning of revisionism on the Internet, the most potent means of presenting and disseminating banned ideas and suppressed information ever devised.

Why just the beginning? Because there's no sign that the furious repression of Holocaust revisionism abroad—above all in Western Europe and Canada, with Australia and South Africa doing their bit as well— is abating. On the contrary, new laws are being proposed (as in the United Kingdom, where the Labor Party, poised to replace the crumbling Tory regime, is pledged to pass antirevisionist legislation) and existing laws are being enforced with new vigor. 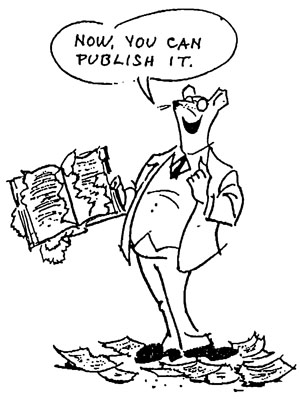 The printing press, the bookstore, the handbill, the spoken word: each of them, all of them, if used to doubt the obligatory version of the Nazi Holocaust, can bring fines, imprisonment, and personal ruin to citizens of any one of a dozen or more nations that pride themselves on their highly evolved dedication to human rights. For those unlucky enough to experience such suppression (and for those living in other nations—including this one—in which, regardless of the law. intolerance is enforced through commercial censorship), the Internet is the most convenient way. and sometimes the only way, to get the other side of the Holocaust story.

Certainly the proprietors of the story aren’t going to let it be forgotten. But, by tying the credulous—and involuntary—acceptance of the Holocaust, and the mania that goes with it, to such Holocaust lobby and Zionist adventures as the ongoing occupation of the West Bank and the proposed plunder of the Swiss banks, our opponents are guaranteeing that critics of such bullying and extortion will be forced to confront the myth invoked to justify it. Thus the current interest in Roger Garaudy’s Founding Myths of Israeli Politics in the Arabic and Islamic world.

With the participation of Ernst Zuendel on his own Website under threat from the latest in Canadian bureaucratic chicanery, the importance of CODOHWeb is underscored. As we have noted here more than once, since foreign sites are subject to increasing legal danger, foreign subscribers must look increasingly to revisionism’s great bastion of First Amendment freedom—the United States of America.

In an odd reversal of the World War II scenario, in which the Anne Frank-style family huddled in secret around its radio to listen to the BBC, now Continental revisionists turn, oftentimes secretly, to their computers for revisionist news from CODOHWeb and other revisionist sites in the free world. In this respect, revisionists have become the new “Jews,” while democratic European leaders have become the new totalitarians, deploying modern Gestapos, not infrequently at the urging of “human rights” organizations broadly influenced by—Jews.

CODOH’s decision to challenge the Canadian government by making sure that the revisionist treasure trove of the Zuendelsite remains accessible to seekers of truth around the planet demonstrates, as the year 1997 begins, that CODOH's obligations have grown: we are no longer responsible merely to our fellow Americans; our responsibilities and our challenges are now world-wide.

[Your contribution enables CODOH to bear the costs of carrying on its own fight, and helping our beleaguered ally in Canada, Ernst Zuendel, continue to get the truth out—gagged or not. Please give what you are able.]