Lyndon Johnson Was First to Align US Policy With Israel's

Donald Neff is author of several books on US-Middle East relations, including the 1995 study, Fallen Pillars: Us. Policy Toward Palestine and Israel Since 1945, and his 1988 Warriors trilogy. This article is reprinted from the November-December 1996 issue of The Washington Report on Middle East Affairs (PO. Box 53062, Washington, DC 20009).

President John F. Kennedy was assassinated in Dallas on November 22, 1963. While a traumatized nation grieved for its youngest president, he was succeeded by Vice President Lyndon B. Johnson, who was to become the most pro-Israel president up to that time. A sea change was about to take place in America's relations with Israel.

Johnson was quick to declare his support for the Jewish state. Shortly after being sworn in as president, Johnson reportedly remarked to an Israeli diplomat: "You have lost a very great friend, but you have found a better one." Commented Isaiah L. Kenen, one of the most effective lobbyists for Israel in Washington: " ... I would say that everything he did as president supported that statement."[1]

Up to Johnson's presidency, no administration had been as completely pro-Israel and anti-Arab as his. Harry S Truman, while remembered as a warm friend of Israel, was more interested in his own election than Israel's fate. After winning office on his own in 1948 with the support of the Jewish vote, he seemed to lose interest in the Jewish state.[2] Dwight D. Eisenhower was distinctly cool toward Israel, seeing it as a major irritant in America's relations with the Arab world and US access to oil. There were no powerful partisans of Israel in his administration, and his secretary of state, John Foster Dulles, was a frequent critic of Israel.

Kennedy was considerably warmer toward the Jewish state and became the first president to begin providing major weapons to it, breaking an embargo in place since 1947.[3] Yet he valued the US position in the Arab world, particularly with Egypt's Gamal Abdel Nasser, and as a result maintained a fairly even-handed policy despite having a number of proIsrael officials in his administration.

All this changed dramatically under Johnson. Not only was he personally a strong supporter of the Jewish state but he had a number of high officials, advisers and friends who shared his view. These included officials within the administration such as McGeorge Bundy, Clark Clifford, Arthur Goldberg, Harry McPherson, John Roche, the Rostow brothers, Walt and Eugene, and Ben Wattenberg. These officials occupied such high offices as the ambassador to the United Nations, the head of the National Security Council, and the number two post at the State Department. They were assiduous in putting forward Israel's interests in such memoranda as "What We Have Done for Israel"[4] and "New Things We Might Do in Israel"[5] and "How We Have Helped Israel."[6] 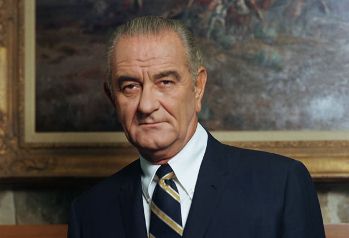 The president was repeatedly urged by Israel's supporters to embrace Israeli policy, give the Jewish state increased aid, and distance America from the Arab world. So pervasive was the influence of Israel's supporters during Johnson's tenure that CIA Director Richard Helms believed there was no important US secret affecting Israel that the Israeli government did not know about in this period.[7]

So closely allied were US and Israeli interests in the mind of "Mac" Bundy, the special coordinator of Middle East policy during the 1967 war, that he once sought to buttress a recommendation to Johnson by remarking: "This is good LBJ doctrine and good Israeli doctrine, and therefore a good doctrine to get out in public."[8] When initial war reports showed Israel making dramatic gains and several officials in the State Department Operations Room outwardly showed satisfaction, Undersecretary of State Gene Rostow turned to them with a broad smile on his face and said ironically: "Gentlemen, gentlemen, do not forget we are neutral in word, thought and deed."[9] In the State Department's summary of the start of the war, Rostow's brother, Walt, the national security adviser, wrote on a covering letter to Johnson: "Herewith the account, with a map, of the first day's turkey shoot."[10]

Beyond the administration's supporters of Israel, one of Johnson's closest informal advisers was Supreme Court Justice Abe Fortas, another warm friend of Israel's. Two of Johnson's closest outside advisers were Abraham Feinberg and Arthur B. Krim, both strong supporters of Israel. Feinberg was president of the American Bank & Trust Company of New York and the man whose "activities started a process of systematic fund-raising for politics [in the late 1940s] that has made Jews the most conspicuous fund-raisers and contributors to the Democratic Party," according to a study by Stephen D. Isaacs, Jews and American Politics. Johnson routinely consulted Feinberg on Middle East policy.

Feinberg was a vocal supporter of increased aid to Israel. Although an American, Feinberg at various times owned the Coca-Cola franchise in Israel and was a part-owner of the Jerusalem Hilton Hotel. When his bank fell into trouble in the 1970s and two of its officers were convicted of misappropriating funds, the Israeli Bank Leumi Company, in a generous act of reverse aid, purchased Feinberg's American Bank & Trust Company.[11]

Arthur Krim was president of United Artists Corporation of Hollywood, a New York attorney and another major Democratic fund-raiser. He served as chairman of the Democratic National Party Finance Committee and chairman of the President's Club of New York, the most potent source of Johnson's campaign funds. Krim was married to a physician, Mathilde, who in her youth had briefly served as an agent for the Irgun, the Jewish terrorist group led by Menachem Begin.

The Krims were so close to Johnson that they built a vacation house near his Texas ranch to be close to him on long weekends and were regular guests at the White House. Mathilde Krim stayed at the White House during much of the 1967 war and was a regular caller at the Israeli Embassy, passing reports and gossip back and forth. The Krims, like other Johnson friends, did not hesitate to advise the president on Middle East policy.[12]

How influential the Krims were in forming Johnson's Middle East policy was hinted at by notes in the president's daily diary for June 17, 1967. The notes reported that at a dinner with the Krims and others at Camp David, Johnson openly discussed a speech he was working on that was to establish the nation's Middle East policy for the years ahead. According to the notes, Johnson read from various drafts of the speech around the dinner table, "inserting additions and making changes, also accepting comments and suggestions from all at the table." Thus two passionate partisans of Israel, the Krims, helped Johnson refine what was later called the "five great principles of peace," the pillars of US policy in the Middle East for the next two decades. After Johnson delivered the speech on June 19, he received a report of an enthusiastic phone call from Abe Feinberg saying that the Jewish community was delighted with the speech. "Mr. Feinberg said he had visited with Israelis and Jewish leaders all over the country and they are high in their appreciation."[13]

Under Johnson, aid to Israel increased and the old arms embargo was completely shattered, portending the massive transfer of treasure, technology and weapons that began in the next administration of Richard M. Nixon. That, of course, was only the beginning of the age of total support of Israel, which has reached new heights under Bill Clinton.

"Nothing could be more irrational than to give the people power and withhold from them information without which power is abused."
—James Madison