Murder of Jews a Crime in the Third Reich 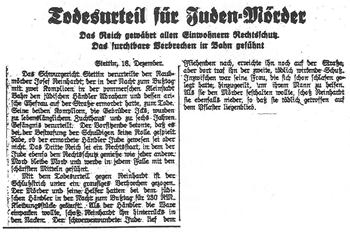 "Death Sentence for Murderer of a Jew. The Reich guarantees protection of law for all residents. Terrible crime in a train punished." Under these headlines, this report appeared in December 1937 in numerous German newspapers.

A jury court in Stettin, the paper informed readers, had sentenced Josef Reinhardt to death for killing a Jewish businessman named Abraham and his non-Jewish wife. One accomplice was sentenced to life imprisonment, and a second to six years imprisonment. The newspaper report continued: "That the victim was a Jew made no difference in passing sentence, the presiding Judge stressed. The Third Reich is a state of law, in which Jews enjoy the protection of law every bit as much as other residents. Murder is still murder, and will be punished most severely in each case."

Murder remained a crime during the war years. Paragraph 211 of the revised German penal code (published in October 1943), defined murder without any qualification about the victim's race, religion or nationality, and designated capital punishment for the crime. German military regulations were even more strict. The updated, 1943 code spelled out severe punishment for the soldier who carried out orders in violation of the law. "The subordinate... is punishable as a participant... when he knows that the superior's order would have the aim of leading to a military or other crime or violation." (New York Review, Oct. 7, 1993, pp. 51-52.)