The Crucifixion of Jews Must Stop! 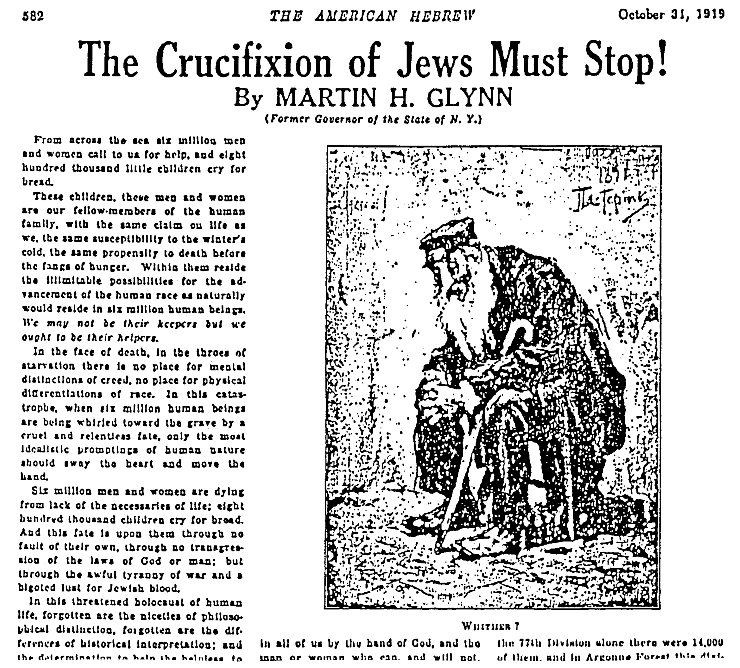 Half a century before the "Holocaust" term came into widespread use, and 15 years before the incessantly repeated "Six Million" figure of alleged wartime Jewish victims was ordained at Nuremberg, both were uncannily cited in an influential New York Jewish weekly. This was in the October 31, 1919, issue of The American Hebrew, probably the most influential English-language American Jewish periodical of its day. Ostensibly written by former New York state Governor Martin Glynn, this article appeared under the impudent and timeless headline: "The Crucifixion of Jews Must Stop!" "Six mil· lion human beings are being whirled toward the grave… six million men and women are dying," the Jewish weekly told readers. In "this threatened holocaust of human life," it went on, European Jews are innocent victims of "the awful tyranny of war and a bigoted lust for Jewish blood." (This article was provided by the Polish Historical Society of Stamford, Connecticut.)

" ... We must be responsible for our actions, which, by their wisdom or folly, may determine the rest of our lives. Our dreams may give expression, pleasant or painful, to our subconscious desires or fears. But in our waking hours, we must, if we are rational, make our decisions on the basis of the most objective and coldblooded estimates we can make – estimates of the forces and tendencies of the world about us – estimates of the realities with which we must deal. Remembering always that nothing is likely to happen just because we think it's good, or unlikely to happen just because we think it's evil."
—Revilo P. Oliver