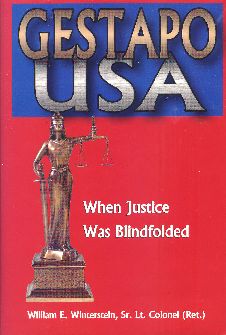 As part of "Operation Paperclip" shortly after World War II, the USA transported a number of captured German rocket scientists to Ft. Bliss, Texas, where they were kept under quasi arrest for almost two years. William Winterstein was the Army officer who served as steward of this valuable war booty. A close friendship developed between Winterstein and the leading personality of these German rocket scientists, Wernher von Braun, so that when the Apollo Moon Landing Program got under way, von Braun brought Winterstein to Huntsville, Alabama, as part of his team.

Winterstein begins his book with the triumphant story of the German scientists and technicians who gave the USA world supremacy in space exploration. Most of the book, however, is devoted to the scandal involving Dr. Arthur Rudolph, the manager of the Apollo Program. Early in the Eighties, Rudolf came under the crosshairs of the witch hunting Office of Special Investigation (OSI), which had been established in 1976 by President Jimmy Carter under pressure from the Jewish lobby. This was a special department of the Department of Justice whose function was the discovery and deportation of former National Socialist criminals who had emigrated to the US. The OSI alleged that Dr. Rudolph had committed war crimes in the course of his activities as director of production of V2 Rockets at the Mittelbau facility. In addition, the OSI charged that he was a Nazi and a racist since he had joined the Party in 1931. The two Jewish inquisitors assigned to the case, Neil Sher and Eli Rosenbaum, decided against establishing direct contact with Dr. Rudolph, preferring to deal with his lawyer instead. They made concrete threats of attacking Dr. Rudolph in an expensive and long drawn out legal procedure designed to revoke his US citizenship. However, they hesitated to present the evidence which they allegedly had against him. In the Fall of 1983 they finally offered Dr. Rudolph a deal under which he would voluntarily renounce his US citizenship, leave the USA permanently, and plead guilty to having exploited slave labor. In return, they assured him that he would receive his full retirement benefits plus Social Security while his naturalized wife and children would be allowed to keep their US citizenship. Because Dr. Rudolph had recently undergone a bypass operation, was in a stressful situation and lacked financial means to protect himself from prosecution by a branch of the federal government, he finally agreed to these conditions, albeit under protest. In 1984, Dr. Rudolf left the United States and returned to Germany as a visitor. In accordance with his agreement, he renounced his citizenship at the American Embassy. Since Dr. Rudolph was no longer a citizen of Germany, this caused a diplomatic protest on the part of the German government. That government, which emulated Washington’s frenzied persecution of former National Socialists, had no desire to be seen as a dumping ground for unwanted US citizens. Washington paid no attention to the protests of its vassal state, however.

In view of the charges leveled by the OSI, Germany also pressed charges against Dr. Rudolph. These were soon dropped for lack of evidence. Furthermore, Germany’s request for assistance in obtaining evidence disclosed that the OSI had been bluffing. There was no evidence of culpability on Rudolph’s part. The OSI had gone so far as to advertise in newspapers for incriminating evidence, without success.

At a reunion of his old Apollo team, William Winterstein learned of the disgraceful affair and became involved in the Rudolph case. Ever since then he has been active on Rudolph’s behalf, seeking official rehabilitation and reinstatement of citizenship. Over a period of 15 years, he has collected a great deal of evidence and entered appeals of all court decisions. Despite clear and overwhelming evidence in support of Rudolph, his Sisyphus labors have remained without success at any level. This is a very sobering realization for anyone who still has faith in our system of government. Even the US Congress allowed itself to be misused by the OSI, as it sealed the Rudolph file. It will be many years before the public knows of the dirty tricks which the ISO used to assassinate the character of one of the greatest German American scientists and then deprive him of his citizenship.

Winterstein finishes off his fascinating story by exposing close collaboration between the OSI and the KGB in framing Rudolph. Perhaps this provides our best insight into the motivation and methods of the OSI.