This past April 13th, while I was traveling in Southern California, I received a phone call from my wife informing me that a friend of John Sack had called to inform us that John had passed away March 27th. This friend was going through John’s address book and calling those listed. Of course I was saddened but not surprised, since we had known for some years that he was battling cancer.

It was a hot and humid Sunday afternoon on July 16th, 1995, when John drove up to our country home near Huntsville, Alabama, to stay three days with us while on a book promotion tour of his The Boys in Company C, a journalistic work on the Gulf War of 1990/91, and I arranged a couple of radio talk shows and an extra book store setting for his effort. He arrived in a 1980’s model Pontiac Sunbird convertible with no air conditioning, sweltering in the heat and humidity of a typically July summer Sunday. That bald head was not even covered by a hat, as I recall.

At 8 PM in Nashville, I picked up Jewish revisionist David Cole and his girlfriend upon their arrival from California, joining us in order to spend time discussing John’s Eye for an Eye book, wherein he exposed certain Jews in Poland who during 1945/46 established their own Communist affiliated concentration camps for German men, women, and children they incarcerated – without "due process," of course – and treated, mistreated, tortured, maimed, and murdered at will over that period of time.

John came to visit with us, clearly convinced that we were a couple of right wing extremists, "rednecks," simplistic "anti-Semites," and "Holocaust Deniers." But he came anyway. His journalistic curiosity, no doubt, got the better of him.

Three days later, he left in the Sunbird convertible a changed man. He was quite impressed with my wife’s discussions about Holocaust issues, concentration camps – some 17 of them to which I had "dragged" her over the years – and Jews and alleged "anti-Semitism" and more. He found the discussions with the quiet speaking Cole to be moving also, and I can only guess that he found my additions here and there to be of positive value, because when I put him on the phone with Mark Weber of the Institute of Historical Review, they planned to get together in a couple of weeks when John arrived in California on the book tour.

John, before departing here, said that he would like to present a talk to an IHR conference one day – trying to prove us all wrong, of course – and I fully concurred in agreeing to promote such. In time, John did this as the banquet speaker for David Irving’s first "Real History" gathering in Cincinnati, Ohio, in August of 2000. He also delivered the same basic talk to the 13th IHR Conference meeting in Orange County, California, within a few months. The Journal of Historical Review (defunct since Fall, 2002) carried a cover photo of a grinning John Sack seated next to Ernst Zündel at dinner.

John early on had informed me that he wanted to publish his talk in either The Village Voice or Esquire – to which he had made numerous contributions over the years. By February 2001, he succeeded in Esquire with "Inside the Bunker. The People who believe that the Holocaust did not happen" (pages 98ff.) He told me by phone that he used "Holocaust Revisionists" throughout, but that an Editor revised this to read "Holocaust Deniers."

A humorous aside is that the photographer who flew from New York to photograph me with one of my Peugeot antiques, ended up buying my wife’s Peugeot, which I towed to Westchester County, New York, the week of the Presidential election when Bush and Gore and the nation were watching the count and recounts of votes.

John sent me an email after his IHR conference talk, dated June 2, 2000, saying:

[…] I loved the conference, and Elda will find that I’m not doing a number on you; the story – if it’s biased at all – will be biased towards you, though I will say that I disagree with you. I’ll send you a copy if Esquire will let me, which they probably won’t. […]

"The slippery roof" was my wife’s story about the Talmudic tale of a Jew falling off a roof and, while on the way down, happens to impregnate a Jewess, with a discussion as to whether or not the child born later was a bastard or not. At first John refused to believe us, but he paid a researcher who verified the story, saying so in the Esquire article.

How did I come to know John personally and introduce him to Revisionist circles? The simple story is that I watched him on CBS’ "60 Minutes" when interviewed by Steve Croft in November 1993, and Eye for an Eye became a controversy for "the Holocaust Industry" to try to play down. World Jewish Congress Director Elan Steinberg was enraged that CBS would promote such a story that Sack had carefully researched over a seven year period, with as many personal interviews with key Jewish camp commandants as he could arrange. The most notable of these murderers was Solomon Morel, now residing safely in Israel where criminal Jews can readily flee Gentile courts, with Morel living in luxury near Tel-Aviv. Even Poland sought to have him extradited to stand trial, with the perfectly hypocritical government of Israel declaring that the statute of limitations had run out!!! I say, tell that to John Demjanjuk and scores of others that Jews have extradited or otherwise persecuted in US and Canadian courts! 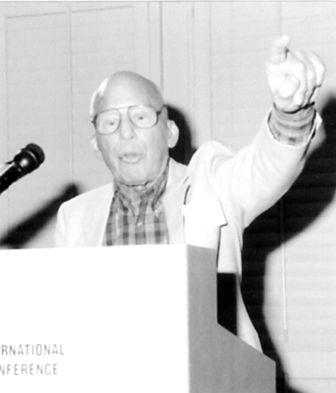 John Sack during his speech at the 13th IHR Conference

Right after the "60 Minutes" show, I bought Eye for an Eye and read it carefully and wrote a review to submit to the Journal of Historical Review. I sent a copy to John via his publisher. He wrote a nice reply dated September 30th, 1994, thanking me for my review, praising me for my sincerity and noting that "Jewish professors" writing reviews of the book for The Nation and The New Republic had not shown similar sincerity in their shabby treatment, but who chose rather to engage in personal attacks on the author.

"Please let me call you Dr. Countess, for fear that if I call you ‘Bob’, then Deborah Lipstadt will be on TV saying that I’m on a first-name basis with the neo-Nazis, the antisemites, the Holocaust deniers, and the Institute for Historical Research [sic!]. Nothing new – she’s been on TV calling me myself a neo-Nazi and an antisemite, and she’s personally told me I’m worse than the Holocaust deniers, […] With warm regards, John."

Until his death, John truly functioned as a journalist – not a careful historian who pursued Exactitude. He genuinely believed in the 5-6 Million Holocaust Story, but he told me more than once that he had no time nor interest in pursuing in detail the issues we Revisionists maintained. John learned quite forcefully what I told him after the US Holocaust Memorial Museum cancelled his talk on Eye for an Eye, when I declared:

"If we invite you to speak at the IHR, you may rest assured that you won’t be cancelled."

John lived in Ketcham, Idaho, in glorious ski country, a sport he enjoyed. He never married. When he told me he was fighting cancer, and amidst the worst of it perhaps, while on the phone one time I suggested that I pray with him, a confessed atheist: he was pleased and thanked me.

John Sack was a good and decent human being, a prodigious writer, sparing no energy to go to the sources of an important story. He had been working for years on a Chinese "mafia" type, but I do not know how far he went in finishing it. My wife and I will always remember John’s smile and warmth and appreciation for the simple aspects of hospitality and conversation. Rest in peace, John Sack!