No Smoking Gun, No Silver Bullets: The Real News of Rosenberg's Diary

In June of 2013, the media was buzzing with the announcement of the discovery of the diary of Alfred Rosenberg by the US Immigration and Customs Enforcement (ICE) and Homeland Security Investigations (HSI). Initial reports announced that the diary “could offer new insights into the Holocaust.”[1] News conferences were held with officials from the Department of Homeland Security, the Justice Department and the US Holocaust Memorial Museum (USHMM). In a Web posting, the USHMM declared:

“Its discovery will undoubtedly give scholars new insight into the politics of Nazi leaders and fulfills a museum commitment to uncover evidence from perpetrators of the Holocaust.”

The Israeli newspaper Ha’aretz spewed considerable venom at Rosenberg calling him “a pretentious fool” and “grotesque.” But Ha’aretz too anticipated major revelations regarding the Holocaust in the diary. They conjectured,

“Indeed, it was Rosenberg who may have planted some of the seeds that ultimately grew into Hitler’s seemingly irrational decisions to divert much-needed German war resources to murdering Jews, even as the German army was sustaining losses at the front.”[2]

By December, the media was once again flooded with news regarding Rosenberg and his diary. The diary had now been turned over to the USHMM. The UK-based Mail On-line featured the headline: “400 pages written by Alfred Rosenberg, a senior Nazi who played a central role in the extermination of millions of Jews, given to DC museum.”[3] News coverage from around the world was basically the same. Interestingly, coverage by The Washington Post included several comments that should have been the headlines and real news story:

“…details of the Nazis’ grand plans for genocide and brutal domination are absent from the pages.”[4]

The Post goes on to report that Jürgen Matthäus, director of applied research at the USHMM’s Center for Advanced Holocaust Studies commented, “[Rosenberg] saw no reason to elaborate on fundamental Nazi goals, as he regarded them as self-evident.” [5] Matthäus continued:

“If you are looking for shattering revelations about the Nazi era, you’re not going to find them. His diary often seems muted, if not silent, on crucial topics and important events, including the persecution of Jews.”

But what “smoking gun?” Why was the Museum in need of a “silver bullet?” What or who was the werewolf they were looking to slay? To the uninformed, the questions remained unanswered. But to the attentive reader, the questions reveal a bit of the disappointment and ongoing frustration of the keepers of the ‘official’ story. 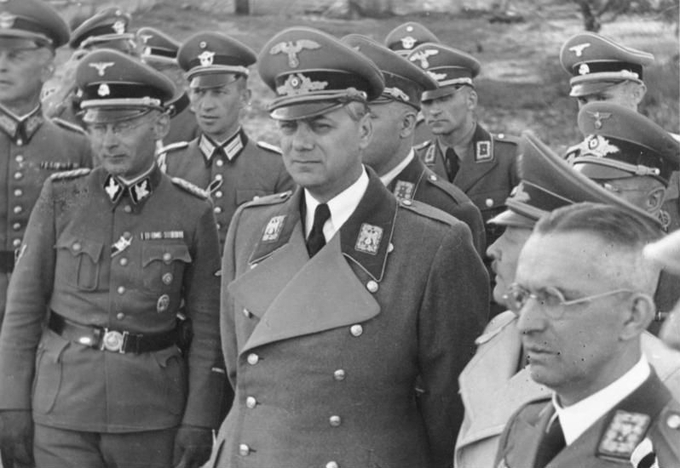 Wikipedia defines the term "smoking gun" as “primarily, a reference to an object or fact that serves as conclusive evidence of a crime or similar act.”[6] Is this an acknowledgement that conclusive evidence of the Holocaust is lacking? The public perception, brought on by years of assertions from various outlets that the Holocaust is the most thoroughly documented crime in the history of the world is demonstrably false. Professor Arno Mayer of Princeton acknowledged that, “sources for the study of the gas chambers are at once rare and unreliable.”[7]

But how could an orchestrated program for the murder of millions be carried out without orders, without plans, without documents, without even private comments? Was there not only a grand conspiracy to exterminate the Jews of Europe, but also an even grander conspiracy to cover up the crime? Or, like all grand conspiracies, is the myth of the Holocaust built on delusions, revenge, propaganda, and even lies?

It appears that the “smoking gun” would have been conclusive evidence, a comment, or at least an acknowledgement of an order for the extermination of the Jews by Hitler or any member of the National Socialist leadership.[8] Unlike the general public, historians and officials at the USHMM understand that not only is such an order missing, the private papers, diaries, and other documents left by those present nowhere confirm a coordinated program for mass extermination.[9]

And what of the “silver bullet” that the Museum hoped to find? In folklore, a silver bullet is often the only weapon that is effective against a werewolf or other monsters.[10] There can be little doubt that even a shred of evidence would have been used as a “silver bullet” targeted directly at the heart of Holocaust revisionists and those who question the gas chamber story, the foundation upon which the USHMM is built.

One should accept the basic logic of the USHMM and others who expected to find a “smoking gun.” Had there actually been a program to exterminate the Jews of Europe, Alfred Rosenberg should have commented on this in his diary. Had Rosenberg commented on a program of mass extermination, the Holocaust revisionist werewolf could finally be eradicated, removing the greatest challenge to the orthodoxy upon which the Holocaust faith and the USHMM is built.[11]

News stories referred to Rosenberg as “an elite Nazi leader who had the ear of Adolf Hitler,”[12] a “Hitler Aide,”[13] an “influential Nazi,”[14] and a “Hitler Confidant.”[15] But who was Alfred Rosenberg and why should he have known of the Holocaust?

Rosenberg, who was born on 12 January 1893 at Reval in Estonia, is best remembered as the author of Der Mythus des 20. Jahrhunderts (The Myth of the Twentieth Century), a work that provided National Socialism with a definitive theory of history as a function of race.[16] Rosenberg became an early member of the NSDAP, having joined the party in 1919. By 1921, he assumed the role of editor of the party newspaper, the Völkischer Beobachter.[17]

Rosenberg oversaw many party activities while Hitler and Hess were in prison at Landsberg in 1924. Over time, he became the head of the foreign policy office of the party. He was also responsible for defining party policy with regard to secondary and higher education.[18]

Rosenberg led a special staff with the responsibility for collecting and safeguarding the art treasures of the occupied Eastern territories. By 1941, Rosenberg had taken on responsibility for setting up the civil administration of the occupied Russian and Baltic territories and served as Reichsminister für die besetzten Ostgebiete (Reich Minister for the Occupied Eastern Territories).[19]

After the war’s end, Rosenberg would find himself dragged before the Nuremberg tribunal to stand trial. When the Allied judgment came down, Rosenberg was found guilty of all four counts of the indictment, namely: 1) Conspiracy to commit crimes alleged in other counts; 2) Crimes against peace; 3) War Crimes; 4) Crimes against humanity.[20]

Part of the judgment against Rosenberg reads:

“Rosenberg bears a major responsibility for the formulation and execution of occupation policies in the Occupied Eastern Territories. He was informed by Hitler on April 2, 1941, of the coming attack against the Soviet Union, and he agreed to help in the capacity of ‘Political Advisor.’ …On July 17, 1941, Hitler appointed Rosenberg Reich Minister for the Eastern Occupied Territories, and publicly charged him with responsibility for civil administration… He helped to formulate the policies of Germanization, exploitation, forced labor, extermination of Jews and opponents of Nazi rule, and he set up administration which carried them out… His directives provided for the segregation of Jews, ultimately in Ghettos. His subordinates engaged in mass killings of Jews, and his civil administrators considered that cleansing the Eastern Occupied Territories of Jews was necessary.”[21]

Rosenberg was sentenced to hang.

It is little surprise that the discovery of the diary of Rosenberg, which had been missing since the Nuremberg trials, excited staunch believers in the official Holocaust narrative. In fact, had the Holocaust occurred as generally understood and as relayed through many books, films, and museums, the Rosenberg Diary should have contained a wealth of horrifying discoveries. One might have even expected a philosophical defense of the policies that led to mass extermination.

But the diary contains no such evidence. There is no justification of brutal policies; in fact, there is no mention of an order for extermination. There is no mention of gas chambers. There is no suggestion that Rosenberg was even aware of such policies. Grand conspiracists would suggest that Rosenberg was so clever that he purposefully refrained from making incriminating remarks in his personal diary – even at a time when he would have expected nothing less than a complete National Socialist victory. Several writers and psychologists like to write of the “banality” of evil, assuming that the matters appeared so trivial that there was no need to mention them. Of course, the third option is that the events never actually occurred as recorded in our history books.

G.M. Gilbert, who served as the prison psychologist at the Nuremberg Trials, captured many of the thoughts and private comments of the defendants. Gilbert commented that the defendants “were more than eager to express themselves to a psychologist and the only American officer on the prison staff who could speak German.” Gilbert was careful to never take notes in front of the men but would rather record them secretly following his private interviews.[22] He would later collect his notes and publish them in his book Nuremberg Diary in 1961.

From Gilbert’s book we learn of Rosenberg’s first thoughts and comments after being shown atrocity films during the Nuremberg proceedings. Gilbert recorded the reaction of Rosenberg to “recent revelations” as follows:

“Of course, it’s terrible – incomprehensible, the whole business. – I would never have dreamed it would take such a turn – I don’t know. – Terrible!”[23]

And later during one of Gilbert’s private interviews:

“I don’t know. I guess it just ran away with him [Hitler]. – We didn’t contemplate killing anybody in the beginning; I can assure you of that. I always advocated a peaceful solution. I held a speech before 10,000 people which was later printed and distributed widely, advocating a peaceful solution. – Just taking the Jews out of their influential positions, that’s all. Like instead of having 90 per cent of the doctors in Berlin Jewish, reducing them to 30 per cent, or something like that – which would have been a liberal quota even then. – I had no idea that it would lead to such horrible things as mass murder. We only wanted to solve the Jewish problem peacefully. We even let 50,000 Jewish intellectuals get across the border.”[24]

Rosenberg continued on the idea of Jewish deportation:

“Well, I knew they were being transported to the East, and understood that they were being set up in camps with their own administration, and eventually would settle somewhere in the East. – I don’t know. – I had no idea that it would lead to extermination in any literal sense. We just wanted to take them out of German political life.”[25]

While the USHMM was unable to find a “smoking gun” that supports the orthodox narrative, researchers should examine the documents for evidence of the truth of the events of these years. What does the diary reveal, if anything, about programs of mass deportation? What does it say about the epidemics that ran through the camps? Is there evidence that the National Socialist leadership sought to fight such epidemics? What evidence in the diary actually upholds the revisionist position?

I for one expect that honest inquiry would lead to the rightful revision of this dark time in our recent history. And only by correcting the mythology of this time can we move forward to understand the events of our modern history of the past 70 years. Perhaps a “silver bullet” may still be found in the diary’s pages—a bullet that can be aimed at the hateful conspiracy theory that today goes by the name “Holocaust.”