The 1999 Krege Report on the Treblinka Extermination Camp

On Jan 21, 2012, The Barnes Review posted a paper by Santiago Alvarez reporting about research conducted by a mainstream archaeologist in the area of the former German wartime camp "Treblinka," where some 700,000 Jews are said to have been murdered during WWII. In this posting reference was made to the preliminary results of similar research conducted in 1999 by Australian engineer Richard Krege. Alvarez indicated that so far Krege's brief paper on the results of his research had been published only in German and French. Made aware of this, one of our volunteers swiftly translated Krege's paper, and here it is (somewhat edited and corrected).

The number of alleged victims of the Auschwitz-Birkenau concentration camp has already been reduced considerably in recent years. The lowest figure advanced by a historian today is 650,000. In contrast to this, the figure of 875,000 victims given for the Treblinka camp has been relatively stable for decades. It is therefore not wrong to state that this camp is about to challenge the Auschwitz camp system's position as the foremost center of mass murder. It therefore becomes increasingly urgent to submit the site of the Treblinka camp to a detailed forensic analysis. The following contribution is an outline summary of a more detailed study currently being prepared and which will be published later. It is based on modern radar technology permitting the analysis of the composition of soil to a depth of 30 meters without the necessity to move the soil. Using this method we can detect objects lying below the surface and whether the stratification and composition of the soil is homogenous. Archaeologists have dreamed for centuries of having such a device, but we can say that for some Holocaust historians this may turn into a nightmare. 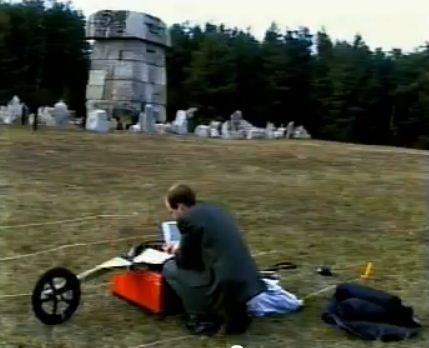 About 60 km north of Warsaw is a memorial commemorating the victims of this camp, 875,000 Polish Jews mainly from the Warsaw and Lublin ghettos, who were brought here from July 23, 1942 onward and allegedly murdered on the spot. From what is said, for 13 months packed trains brought people to the camp.

Just after the war, eyewitnesses claimed that these people had been "steamed" to death,[1] but since "steaming to death" was hard to credit, the eyewitnesses surreptitiously changed their stories. Later it was claimed that every day up to 6,000 people were killed within 10 to 25 minutes in gas chambers using Diesel exhaust.[2]

The Diesel engine is said to have come from a Russian submarine – or a tank (the witnesses do not agree on this subject).[3]

Only in passing it may be mentioned that in 1988, 97 children were trapped in a 400-meter tunnel following a train accident in Washington state. They were subjected to the fumes of two Diesel engines which continued to run as rescuers outside tried to clear the exits. They all came out unscathed.[4] This fact is an unmistakable indicator that something isn't quite right about the claims of mass murder using Diesel exhaust gases. Already in 1985 engineer Friedrich Paul Berg had sufficiently proved that any attempt at mass murder with Diesel-exhaust gases as described by the witnesses would have been doomed to failure.[5] Later he moreover pointed out that such an attempt at murder would also have been technically utterly absurd, because the Third Reich had hundreds of thousands of carbon-monoxide-gas generators at its disposal which were a hundred times more-toxic and easier to operate than any Diesel engine.[6]

But that is not all. The witnesses claimed that back then at Treblinka 875,000 bodies were buried in huge mass graves dug out near the gas chambers. This is a claim which can be verified with archaeological means, because mass graves containing such masses of corpses must have left visible traces in the soil. Already by 1994, graduate engineer Arnulf Neumaier determined that a pit containing 875,000 would have had a surface area of 100,000 m² (1,000,000 sq ft).[7]

In early 1943 Heinrich Himmler is said to have issued the order to dig up and burn the bodies.

Since the Treblinka camp did not have any crematories, it is claimed that wood was gathered from the surrounding forests in a trice and that the 875,000 bodies were reduced almost completely to ashes on huge grills. This is said to have happened within 5 months starting in early 1943.

Arnulf Neumaier has calculated the technical characteristics of such a hypothetical cremation operation:[8] 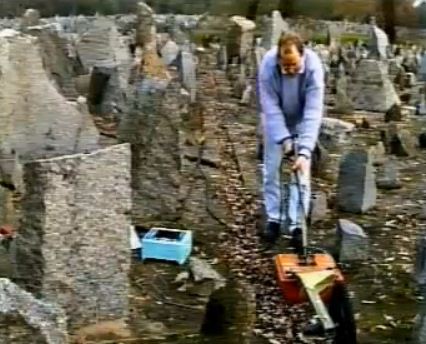 After the SS made 875,000 corpses disappear, and before the Russians arrived at the camp, the SS allegedly also removed completely (according to witnesses): all buildings, all concrete foundations, all fresh water and waste-water pipes, all the rubbish, all glass fragments, all barbed-wire fences, all narrow-gauge rails, all air-raid shelters, and all roads, and they left the area as if the camp had never existed.

Impressed by the inhumane and superhuman feat accomplished by the SS, a small group of Australians travelled to Treblinka in October 1999. Along with them they took a GPR device (Ground Penetrating Radar) and an auger drill, which is a hollow pipe used to take core samples of the soil up to 6 m deep.

GPR is used by geologists, archaeologists, construction engineers, oil companies and police forces. It has been used for example during archaeological excavations around the pyramids in Egypt as well as in Australia and the United States to find the ancient tombs of the first inhabitants.

Depending on its settings, the device can detect variations in soil composition down to 30 meters underground. The Australians adjusted their device to probe to a depth of 6 meters so that it could easily detect even a kitchen knife. The Australians, however, were not looking for cutlery. They were interested in finding traces of these gigantic mass graves.

The device sends a radar signal vertically through the soil, and an image appears on the computer screen. These images can then be stored on the hard disk. Under normal circumstances undisturbed soil is detected, which is represented by near-horizontal and uninterrupted layers. These layers are called "horizons." A delve of a spade, for instance, shows up as a vertical interruption of the horizons, whereby the depth of the delve can be measured rather accurately.

The Computer Image of Treblinka 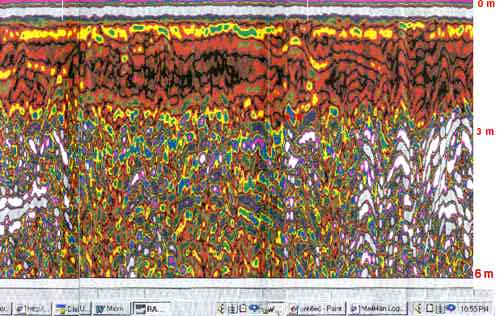 One of the many images received by the Australians over the former graves of Treblinka is given here. The Australians have also probed the ground of other sections of the camp where it is known that the soil is undisturbed and basically without disruptions. A comparison reveals that the radar images taken everywhere in the camp show an almost perfect soil untouched by humans. Everywhere the horizons are virtually uniform and uninterrupted. This picture shows a survey done across 12 meters to a depth of 6 meters.

Using the official plans of mass graves, the Australians worked for three weeks. They surveyed the camp territory with the GPR device from east to west and from north to south and even between the stones and monuments erected after the war. In addition the auger drill unit was used at regular intervals to take soil samples. To be absolutely certain, the team members also repeated the process outside the limits of the camp.

Samples of nearby trees were also taken to determine their age.

Almost all of the ground consists of undisturbed soil, sand and rocks. The trees are over 50 years old.