The Attack on the Liberty: The Untold Story of Israel's Deadly 1967 Assault on a U. S. Spy Ship

In June 1967, during the Six-Day War, Israeli air and naval forces attacked the American spy ship the USS Liberty in the Mediterranean Sea killing 34 and wounding 171 of the crew members. James Scott, a journalist and the son of an officer on the Liberty who survived that attack, has written the most recent, and in some ways the most informative, account of the attack.

Scott draws upon the research of James Ennes, an intelligence officer on the Liberty whose 1979 book was titled The Assault on the Liberty, James Bamford, whose book on the National Security Agency, Body of Secrets, discussed the attack on the Liberty, Jim Miller, Richard Thompson, and others. Scott has also explored various archives and libraries and interviewed numerous people. In regard to the interviews he conducted for the book, Scott tells us, "I often interviewed people on multiple occasions and for hours at a time in their homes, in restaurants, in hunting and Masonic lodges, and on long drives." (Be sure to check out the author's endnotes, where he identifies some people, such as Israelis who were involved in the attack, who declined to be interviewed.) 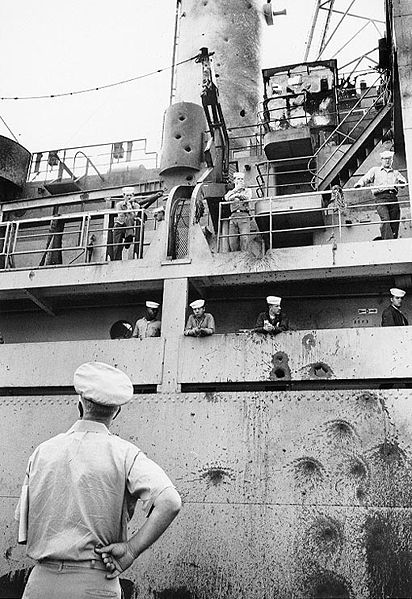 The damaged USS Liberty after the Israeli attack in June 1967

The book presents a detailed and sometimes gory, grisly, or gruesome account of the attack and its aftermath. (It might take a strong stomach to read descriptions of the injuries inflicted on some Liberty crew members, both dead and surviving. Incidentally, as this book shows, if only unintentionally, the scimitar is not the only weapon that can behead people.) Ironically, some of the ammunition used by the Israeli attackers was of U. S. manufacture.

The book also goes into great detail in depicting the reaction to the attack within the U. S. government and the U. S. military, and by the U. S. media.

Within about an hour after the attack, Israeli officials informed the U. S. Naval Attache in Tel Aviv about it, claiming it was a mistake and offering their abject apologies.

Was it a mistake? Many (most?) of the Liberty's surviving crew members didn't think so. And to judge from Scott's research, many people in the U. S. military and the U. S. government didn't think so either. However, with a few exceptions, those in the U. S. government who didn't believe Israel's explanation of the attack did not express their opinions in public, at least not at that time. As far as public statements went, more common were those of politicians who immediately encouraged belief in Israel's excuses for the attack, such as, for example, Roman Pucinski, a Democratic congressman from Chicago's Polish community, who said, among other things, "It would be my hope that this tragic mistake will not obscure the traditional friendship we in the United States have with the people of Israel." While a few congressmen did speak out to challenge Israel's claim that the attack was due to a case of mistaken identity, Congress never formally investigated the attack or held public hearings.

Although many people in the Johnson Administration did not believe Israel's claim that the attack was a mistake, including Secretary of State Dean Rusk, Undersecretary of State Nicholas Katzenbach, and Clark Clifford, head of the President's Foreign Intelligence Advisory Board, they decided, for political reasons, to avoid a break in relations with Israel. As Scott puts it (page 166):

The beleaguered president, anxious to retain Jewish support and refocus on Vietnam, couldn't afford the domestic political controversy. "it was no help if you had a lot of people getting angry at the Israelis," recalled Katzenbach. "If the Israelis screw up the relations, then the Jewish groups are going to bail out the Israelis. It ends up with you having a more difficult situation than you would have otherwise.

And so, spokesmen for the Administration, such as Secretary of Defense Robert McNamara, lied to the press and thereby the public, supporting Israel's almost certainly phony story about the attack being a mistake. The aristocracy of the Navy also assisted in this "cover-up." The Navy ordered Liberty crewmembers to keep their lips tight around reporters. And when Admiral John McCain, Jr. convened the Navy's official Board of Inquiry into the attack, he put significant limits on the investigation. As Scott puts it (p. 176):

Faced with political pressure to conclude the episode as soon as possible, McCain had set strict parameters on his investigators, including barring travel to Israel to interview the attackers. The admiral also allowed his team only one week to investigate, the court's lawyer would later admit that a proper investigation would have required six months.

Although the report of the Board of Inquiry cited the contradictory testimony of Liberty crew members, it ended up accepting the Israeli claim that the U. S. flag on the ship had been hanging limply so that the attackers couldn't see it and identify the Liberty as an American ship. But, as Scott repeatedly points out, there were other ways the attackers could have, and probably did, identify the Liberty as American, including the fact that the ship's name was painted on it in very large letters.

Although the Johnson Administration did not publicly refute Israeli claims that the attack was a mistake, it did demand that Israel pay compensation to the families of Liberty crew members who were killed or injured. After a lot of haggling, the Israelis gave a check to the U. S. Treasury about a year after the attack. But they were not so quick to pay the costs of repairing the ship. And, despite the expressed desires of the Johnson Administration, no one involved in the attack was ever punished. There supposedly was a trial of several people in Israel, but the judge dismissed all the charges. As far as I can tell, the Johnson Administration did nothing to punish Israel for its failure to punish those responsible for the attack.

Some of President Johnson's advisers later regretted the handling of the attack. "We failed to let it all come out publicly at the time," said Lucius Battle, the assistant secretary of state for near eastern and south Asian affairs. "We really ignored it for all practical purposes, and we shouldn't have." George Ball, the former undersecretary of state prior to Katzenbach, wrote that the Liberty ultimately had a greater effect on policy in the United States. "Israel's leaders concluded that nothing they might do would offend Americans to the point of reprisal, " Ball wrote. "If America's leaders did not have the courage to punish Israel for the blatant murder of American citizens, it seemed clear that their American friends would let them get away with almost anything.

I have a couple of criticisms of this book. First, despite Scott's extensive research and the efforts of his "diligent research assistant, Gideon Kleiman," who "scoured Israel's archives for Liberty records," he does not seem to have discovered any definitive evidence about who ordered the attack on the Liberty and why. Perhaps this is due to continued Israeli stonewalling. As I mentioned before, in his endnotes, Scott identified some Israelis who refused to be interviewed. In any case, I was disappointed in this regard.

Another problem is that Scott seems to accept a simple-minded either-or point of view. Either Israel was responsible for the attack or the U. S. government was. (Israel did make some attempts to shift the blame to the U. S. by emphasizing that the U. S. had not told the Israelis that the Liberty was being sent to an area near the fighting.) But why does it have to be "either-or"? Why can't it be that both Israel and the U. S. government were responsible for what happened? After all, did the U. S. government really need (not just want, but need) to put the Liberty "in harm's way" so close to a war zone in order to spy on Israel and Israel's Arab enemies?

One lesson that could be derived from the attack on the Liberty, but which Scott does not derive, is that a foreign policy of international interventionism is a dangerous policy. If Uncle Sam insists on sticking his nose into conflicts here and there around the world, then sometimes his nose is going to get bloodied. (This point might also be relevant to the 9/11 attacks.) If the U. S. government, in 1967, had had a noninterventionistic policy of minding its own business, the attack on the Liberty need not have occurred. (Although Scott does not challenge a foreign policy of international interventionism, he does at least touch on the issue of what he calls "the flawed logic of sending unarmed spy ships alone into hostile waters with only the American flag for protection." In that respect, he does allow for the possibility that the U. S. government had some responsibility for the attack on the Liberty.)

There is much more to this book than I've indicated in this review, including background information on the Liberty and some of its officers. For example, there's a fair amount of information on William McGonagle, the commander of the Liberty, a strict disciplinarian known for chewing out his subordinates before the attack. After the attack, however, he seems to have become more relaxed and tolerant of not-by-the-book behavior, suggesting that the attack might not have been all bad in its effects.