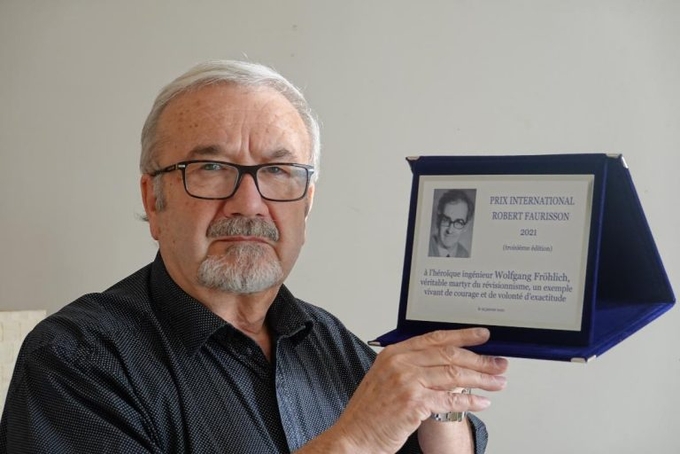 Ending a sad month for H&D, following the loss of our comrades John Bean and Ian Carser, we learned that the great Austrian revisionist – 70-year-old chemical engineer Wolfgang Fröhlich, who earlier this year was awarded the Robert Faurisson International Prize – has died. His longstanding comrade Franz Radl informs us: “As I was told he had to spend several weeks in the intensive care unit because of his Covid-19-illness.”

This tragic news arrived just as I was writing a historical article for this website about the events of December 1941, and it seems now strangely appropriate to combine the two, and reflect on two different but complementary faces of heroism with regard to the Second World War and its legacy for us in the 21st century.

Wolfgang Fröhlich’s heroism was that of a man who speaks the truth as he sees it, with the benefit of specialist technical knowledge and scholarship, knowing that the personal consequences will be catastrophic. In this respect (though from Catholic Austria) he stood in the tradition of Martin Luther who reputedly said in 1521 when summoned to recant his ‘heresy’: “Here I stand, I can do no other”. There is no reliable record that he actually said those words, but he did defy his inquisitors, and we know that he did say: “I cannot and will not recant anything, since it is neither safe nor right to go against conscience.”

Beginning in the 1990s, Wolfgang Fröhlich similarly stood by his seriously researched and thoughtfully expressed views which amount to the most serious ‘heresy’ of our times: challenging historical orthodoxy regarding the purported extermination of six million European Jews in ‘homicidal gas chambers’ on the orders of Adolf Hitler. 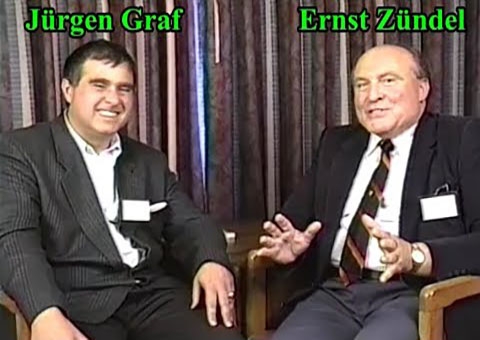 Wolfgang Fröhlich appeared as an expert defence witness at the 1998 trial of Jürgen Graf (above left) and was himself arrested five years later. Alongside German-Canadian revisionist Ernst Zündel (above right), Fröhlich became (in the words of Prof. Robert Faurisson) one of the first victims of President George W. Bush and Rudolph Giuliani in their efforts to crush revisionism.

This challenge began when Fröhlich appeared as an expert defence witness during the trial of Swiss revisionist Jürgen Graf and his publisher Gerhard Förster in 1998. By that time he had for a few years been distributing revisionist texts to Austrian politicians, journalists and others. Based on his own expertise as a specialist in the use of poison gas for exterminating vermin, Fröhlich had concluded that the ‘official’ story about ‘homicidal gas chambers’ being used to kill Jews and others with hydrogen cyanide (‘Zyklon B’) in German ‘extermination camps’ was scientifically impossible.

Even after the Graf trial, it took some time before Fröhlich himself was troubled by the authorities. In 2001 he published a 368-page book entitled Die Gaskammer Lüge (‘The Gas Chamber Lie’). This led to a warrant for his arrest, but no immediate proceedings followed.

It was not until June 2003 that Fröhlich was arrested, an event which according to Prof. Robert Faurisson seems to have been linked to a speech in Vienna by President George W. Bush’s special envoy on combatting ‘anti-semitism’, the notorious Rudolph Giuliani, later right-hand-man to President Donald Trump.

Giuliani demanded action against revisionists, writing in the New York Times that “revisionist viewpoints put us at risk of a repetition of race-based genocide”. Washington demanded, and Vienna obeyed. Wolfgang Fröhlich was arrested on 21st June 2003 and spent twelve of the next sixteen years in prison – the rest of the time on trial or awaiting trial. During one of these intervals of semi-liberty, in 2006 Fröhlich attended the Tehran International Conference to Review the Global Vision of the Holocaust – an event offered uniquely by Iran as being open to all sides of debate on this topic – accompanied by his indefatigable Viennese attorney, Dr Herbert Schaller. He received an ovation from the Iranian audience after simply telling them that he was legally prevented by the Austrian authorities from expressing his views even in Tehran. 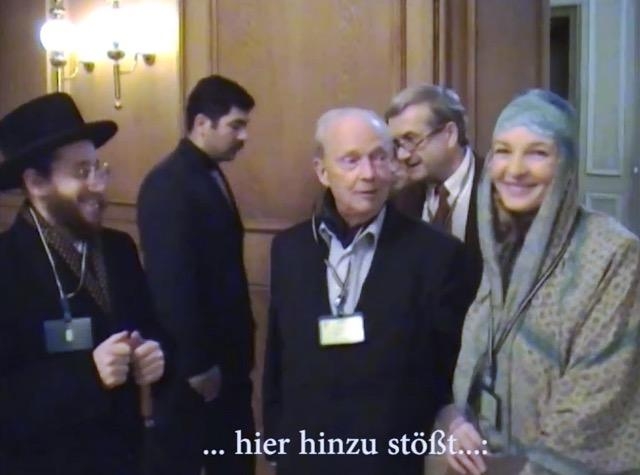 Even after his release in March 2019, Fröhlich spent the rest of his life as a condemned criminal without normal pension and other citizen’s rights. He was even labelled by prosecutors (in true Stalinist fashion) as a criminal ‘lunatic’ as punishment for the lucid, rational expression of his historical and scientific views. During his last two years, Fröhlich was engaged in a series of legal battles to expose the unprofessional conduct of ‘expert’ psychiatric witnesses who had been prepared to parrot the prosecution’s line.

During one of Fröhlich’s court ordeals in 2015, Prof. Robert Faurisson wrote:
“I know Wolfgang Fröhlich. He masters his subject. He expresses himself with moderation. He is not an excited or fanatical person. On the contrary! He honours his country and historical science.
“His fate is upsetting. We must always remember the degree of ignominy to which the ‘elites’ who rule the German-speaking world have sunk and, in particular, the German or Austrian magistrates capable of sending a man of this quality to prison for thirteen years.”

Wolfgang Fröhlich’s heroic stand for truth and justice is sure to survive his death, and inspire future generations as Europe recovers its dignity, sovereignty and traditions. 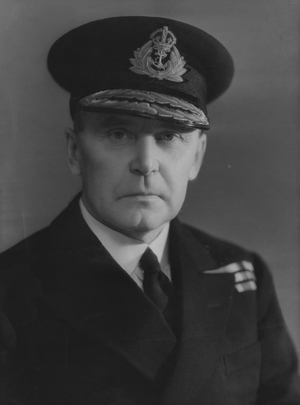 Admiral Sir Tom Phillips (1888-1941) died eighty years ago this month in a war that he deeply opposed, seeing it as the consequence of disastrous decisions by British governments.

By contrast another very different hero – Admiral Sir Tom Phillips – was lost in the mists of history until I found a document in the wartime diaries of Hugh Dalton, the minister in Churchill’s wartime government who took charge of the ‘dirty tricks’ department of Britain’s war effort, the Special Operations Executive.

Admiral Phillips was a hero of a type familiar to students of Greek tragedy – where one often finds a man trapped by circumstance, who has no alternative but to confront his fate.

In June 1940, just a month after Churchill had taken over as Prime Minister and taken Britain over the brink into ‘total war’ – Admiral Phillips told Dalton that this war was a disaster for Britain and was the consequence of several appalling decisions that had alienated countries that should have been our allies.

“He does not care anything about the Italians, who are a worthless lot, but the Spaniards are a very different story. To have Spain as an enemy would jeopardise the whole of our control, both of the western Mediterranean and the Atlantic sea routes. It is unthinkable that we should have been brought to such a point. We backed the Bolsheviks in Spain in 1936 and ’37 against the only man who, in modern times, has been able to make Spain strong. The horrors committed by the Bolsheviks in Spain were seen by our sailors and are on record.

“This was the climax of a foreign policy which had first adopted an attitude towards Germany which made war with her inevitable; had then successively alienated Japan, Italy, and now, finally, Spain. The French had not been fighting in these last weeks. This was because they too had become Bolsheviks. Weygand [the French supreme commander from May-June 1940] had said that the only tough troops in France were the Poles, and that if he had had ten more Divisions of them, he would have won the battle.”

Despite his perception that this war was a disaster for his country, Admiral Phillips took command of British naval forces in the Far East in October 1941. Immediately after Pearl Harbor he set out on his flagship HMS Prince of Wales to confront Japanese forces (the very forces whom he believed should have remained British allies – a view also taken by his former colleague, the ex-Director of Naval Intelligence, Admiral Sir Barry Domvile, who by this time had been interned without trial in England for opposing Churchill’s war policy).

On 10th December 1941, the Prince of Wales and her fellow battleship HMS Repulse were sunk by Japanese air attack. Admiral Sir Tom Phillips – who had so strongly opposed the entire war policy – went down with his ship.

Had he the opportunity, no doubt the Admiral – like Wolfgang Fröhlich – would echo Martin Luther: “I cannot and will not recant anything, since it is neither safe nor right to go against conscience.”

Piece by piece, their fellow Europeans will recover accurate knowledge of their own history.

Our task, in our present, is to recover that control.

First published at http://www.heritageanddestiny.com/two-faces-of-heroism-wolfgang-frohlich-and-admiral-sir-tom-phillips/ on December 1, 2021