What the Holocaust Establishment Will Never Say about Anne Frank 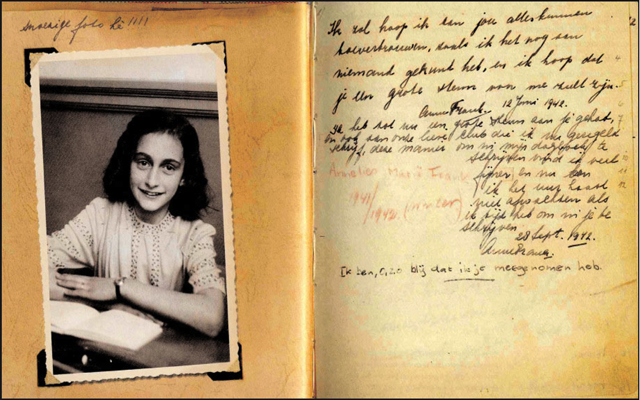 David Merlin has a Bachelor of Arts degree in history and economics from the University of California, Berkeley. He also has a Juris Doctor. He is currently writing a book on the “Irving vs. Lipstadt” trial. He is a frequent contributor to the Committee for Open Debate on the Holocaust, CODOH.com.

Jonas E. Alexis: Anne Frank is arguably one of the most difficult personalities of World War II. She has been revered by political leaders of all stripes, including such as Nelson Mandela. When the Anne Frank Exhibition was opened in 1994, Mandela, a Communist and Marxist/Leninist throughout his political career and an adept of Jewish messianic and subversive movements, declared then that

“The Anne Frank Exhibition explores the past in order to heal, to reconcile and to build the future. I think we will all agree that it is not the most pleasant thing to revive bitter memories, to invoke the pain and suffering of the past.

“But, like the people of the Netherlands and others in Europe who experienced the harsh realities of Nazism and fascism, like the people in the developing world who lived under the brutality of colonialism, we, in South Africa know all too well that we cannot move forward with confidence if we ignore the past.”

How ironic that the man who uttered those words did not even think that Leninism was worse than Nazism or Fascism. Mandela was even trained by the Israeli Mossad!

In any event, there is now an Anne Frank Exhibition in South Africa, but there is not a single exhibition for millions upon millions of innocent people who suffered under Lenin and Stalin—not even in America, the land of “democracy” and “freedom.”

Beyoncé and Jay Z have even traveled all the way to Amsterdam to visit the Anne Frank House, but they never asked the most damning question ever: whatever happened to other people, who suffered under the Bolshevik Regime? Do they deserve our sympathy?

Are these people being fair? Are we really being careful with the historical account? One cogent observer by the name of Marc C. Digiuseppe  recently sent me his great assessment of the some of the problems facing the political and historical worlds which states in part:

“The German people were maligned and abused by the Western Oligarchs in World War I. The Oligarchs cleverly navigated a diplomacy that played upon Germanic Traditions—abstract notions of pride and honor—a rule of the clan that had endured for thousands of years…

“This entire process was then repeated upon the German people at the end of World War II.”

Absolutely true. The questions before us are simply these: When will the Holocaust establishment be fair to the German people, particularly those who suffered under the Red Army? When will they look at the death and evil on both sides of the historical equation? More importantly, what aren’t they telling us about Anne Frank?

Well, we’ll let Merlin answer that question for us.

Now, some readers will probably say that we are trying to deconstruct history here. Not at all. We should all sympathize with those who have suffered under violent regimes and with those who have absolutely and positively nothing to do with revolutionary movements.

In fact, we should all be able to sort out good, bad, and indifferent people. But it is not fair to sympathize with one particular group while ignoring the suffering of others. And the Holocaust establishment has certainly tampered with the Anne Frank account. Now let us allow Merlin to talk about this issue.

David Merlin: There is a rather pretentious writer for the New York Times named Ed Rothstein. Mr. Rothstein specializes in pious critiquing of Holocaust tales and museums. He wrote an article about the Anne Frank extravaganza exhibit put on at the Wiesenthal Center in Los Angeles. The article is entitled “Playing Cat and Mouse with Searing History.”[1]

Rothstein feels that people are drawing the wrong “lesson” from the exhibit. The exhibit is not horrible enough and “horrific circumstances are distilled into effervescent platitudes!” In fact, Mr. Rothstein has totally missed the history lesson. Maybe Mr. Rothstein can be excused since the back story history of the Frank family is never mentioned by Holocaust Believers.

While the story of Anne Frank is tragic, the basic facts of the Frank family history fly in the face of the belief that Auschwitz was an “extermination factory.” To quote Bradley Smith’s Blog,

“Official history is that non-working Jewish people arriving at Auschwitz were all ‘gassed.’ But of the eight sent to Auschwitz on September 3, 1944 from the Annex, not one of them was killed in a gas chamber. Instead, five of the eight were transported back to Germany-Austria in November 1944.”