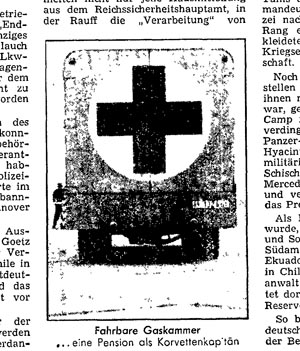 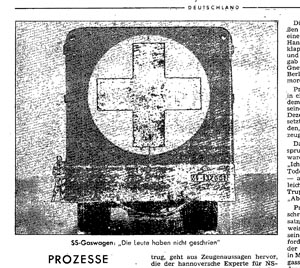 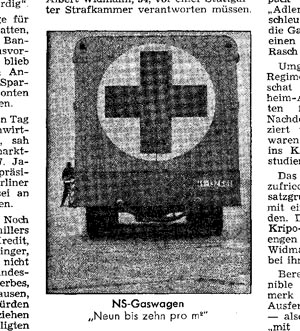 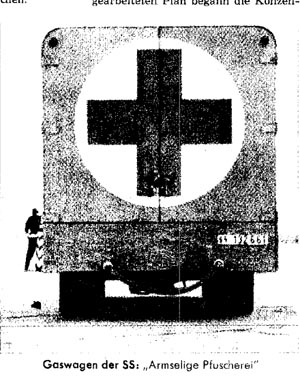 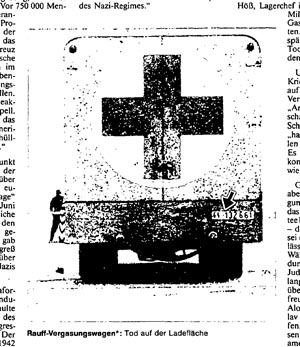 In at least five issues of the German news magazine Der Spiegel a photo was reproduced alongside articles which dealt with trials involving alleged murders in so-called "gas vans," which were supposedly committed during the Second World War by German units in Serbia, Poland and in German-occupied parts of the Soviet Union. The photos depict the rear view of a truck with a huge red cross sign painted on the rear door. See the reproductions in the illustrations to the right. No source has been given for this photo, which caused revisionist authors in the past to doubt the authenticity of this image.[1]

In a recent video, Jewish-American revisionist David Cole revealed that the Simon Wiesenthal Center's "Museum of Tolerance" in Los Angeles used to show an allegedly authentic documentary film depicting the gassing of several children in a "Nazi gas van." David Cole found out that the scene shown by the museum had been taken from the 1961 Polish fiction movie "Ambulans" directed by Polish-Jewish filmmaker Janusz Morgenstern.[2] David Cole managed to have the Simon Wiesenthal Center remove this fake "documentary" by instigating Janusz Morgenstern to confront the Center for this obvious copyright violation.

Watch Cole's video where he explains how he managed to stop this fraud, and then watch his juxtaposition of the Wiesenthal fraud with the Polish movie.

Cole's version of the Polish movie is rather mediocre. A better version can be watched here on YouTube. If you move the video to 8 min 48 seconds, you'll see exactly the picture used by Der Spiegel to illustrate its various articles, see below. The van's number plate can be seen at 8 min 43 seconds: "SS 132661," just like in the Spiegel illustrations. 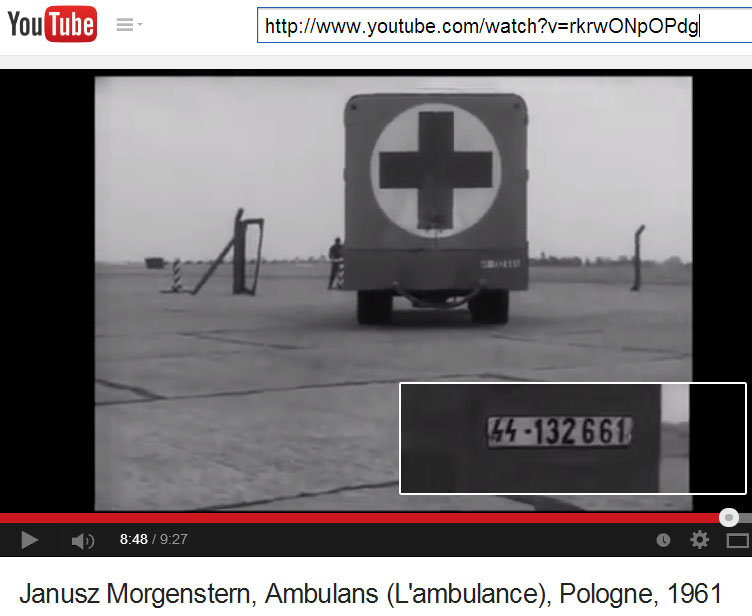 Scene from Janusz Morgenstern's 1961 fiction movie "Ambulans", 8 min 48 seconds into the movie – the source of the image used by "Der Spiegel" to illustrate its articles on gas van murder trials in West Germany in the 1960s. Click to watch the movie at YouTube. The inset in a white frame shows the van's number plate as shown in the movie at 8 min 43 seconds.