Oblivion in the Land of Memory 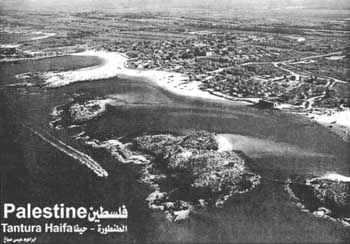 Idyllic aerial photo of the site of the Mediterranean fishing village of Tantura (viewable in color at http://ns1.palestineremembered.com/Haifa/al-Tantura/Picture3150.html). Inhabited for an estimated four thousand years, Tantura's environs contain Canaanite, Greek, and Crusader antiquities, and shipwrecks from Roman and Byzantine times dot its lagoon. In 1948 Israeli army troops killed 250 unarmed Palestinians there, then drove the remaining 1,250 inhabitants out of the village. The villagers' homes were later demolished and a Jewish settlement erected nearby.

The massacre at Deir Yasin, the Palestinian village near Jerusalem where Menachem Begin’s Irgun and Yitzhak Shamir’s Lehi slaughtered over two hundred fifty Palestinians on April 9, 1948, has long symbolized the ruthlessness with which the Zionists seized the Holy Land and killed or displaced so many of its inhabitants. Strange to say, the notoriety of Deir Yasin may have served to obscure as many as forty similar slaughters by Israeli forces in 1948, despite the labors of an increasingly able Palestinian historiography, and of an Israeli revisionism that has re-examined the expulsion and flight of three quarters of a million Arabs from their homes during the “war of independence.”

A recent issue of the Journal of Palestine Studies (20, no. 3, spring 2001), by way of a report on the fate of a master’s thesis in history devoted to one such massacre, throws needed light on Israel’s past and present.

The author of the thesis, Teddy Katz, a committed Zionist studying the history of Israel’s 1948 war at the University of Haifa, was investigating the “microhistory” of Jewish expulsions of Arabs around Haifa when he stumbled across a mass shooting of unarmed inhabitants of Tantura, a fishing village twenty miles south of Haifa, by Israeli regular troops immediately following their capture of village on May 22–23, 1948.

Since the written record was slight and elliptical, Katz recorded several dozen interviews with surviving villagers, and with veterans of the Israeli army’s Alexandroni brigade, the military unit involved. Katz’s findings, culled from the interviews, amplified by additional written accounts, revealed that Israeli forces shot over two hundred Palestinians after they had been disarmed. The killings took place in two stages, the first a rampage by the Israeli infantry immediately after Palestinian resistance had ceased, the second the cold-blooded and systematic shootings of suspected Arab soldiers by Israeli intelligence. The details included the shootings of sons in the presence of fathers, fathers in the presence of sons, rapes, and other horrors.

Katz’s thesis, which received high marks, might have remained unnoticed except for an article in Israeli newspaper Ma’ariv in January 2000, which was quickly followed by a libel suit by Israeli veterans of the Alexandroni brigade who had taken part, including some who had been interviewed by Katz. In the trial, which began in December 2000, the plaintiffs were able to show only minor discrepancies in Katz’s references. Nonetheless Teddy Katz suddenly aborted the trial by retracting his master’s thesis with a published apology that brings to mind confessions in the old Soviet Union, or (more to the point) the apologies of certain Jewish revisionists of the Holocaust who have come under duress. The attack on the Katz thesis and its author’s integrity by Israeli academics, including those from his own university, reminds, too, of the long campaign to strip Holocaust revisionists of their academic degrees, including those earned for work which had no relation to their subsequent revisionist activities.

Israeli professor of history Ilan Pappé, who graded Katz’s thesis at Haifa, provides a judicious account of the affair in the JPS, including a nuanced consideration of the validity of oral testimony in this case and in general. As Pappé notes, the libel suit against Katz is so far the only instance in which any of Israel’s 1948 massacres of Palestinians has ever been subject to investigation in an Israeli court.