When I was writing The Hoax of the Twentieth Century I encountered an extraordinary source, namely, the multi-volume collection of documents and commentary Actes et documents du Saint Siège relatifs à la seconde guerre mondiale (“Acts and documents of the Holy See relative to the Second World War”). The series, whose principal editor was Robert A. Graham, was still being published by the Vatican, and further volumes were in preparation. 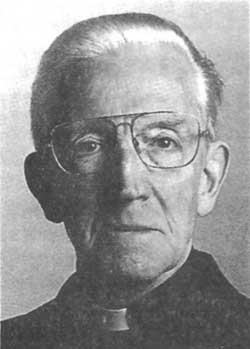 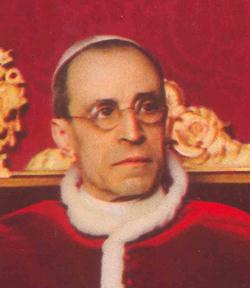 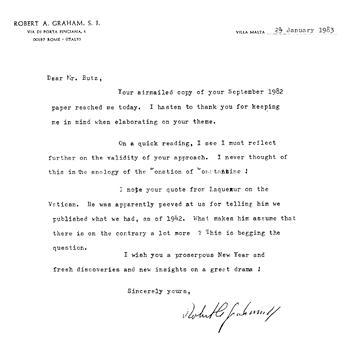 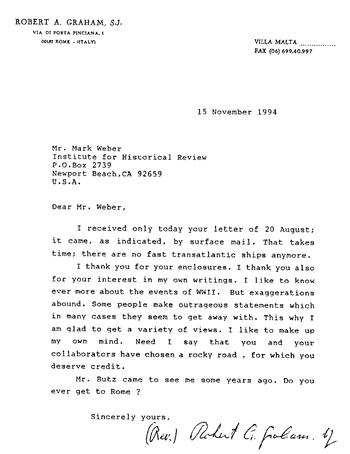 Graham was a former editor of the Jesuit magazine America. The “extermination” claim was not challenged in the series, and it was generally understood that Graham’s main interest was in defending the wartime Pope Pius XII against charges of tacit consent to, and even collaboration with, Nazi policies of physical extermination of the Jews. Such charges crested with Rolf Hochhuth’s play The Deputy.

I believed that the Vatican documents constitute an important source. I devoted an entire appendix of my book to discussing them.

In studying the series of volumes I was struck by some of the editorial remarks, and believed that the editor, although not a revisionist in our sense, was implicitly raising fundamental questions of a revisionist bent. A good example was the quotation of some selected passages from some reports, from apparently well informed sources, delivered to the Pope on July 15, 1943, which described Auschwitz as essentially a work camp, and spoke of Jews who had been deported from France sending letters back to their families.[1]

These impressions were so strong that I believed it necessary to contact Graham directly. In early 1977 I wrote to him in Rome, thus starting a very satisfactory and years-long correspondence, although the request for copies of documents that I made to him at the time could not be filled, for reasons beyond his control.[2]

In summer 1977 I was in Rome and visited him. Our conversation confirmed to me what I had read between the lines in Actes et documents; the editor was puzzled by the evidence he had examined, because much of it seemed impossible to reconcile with the “extermination” legend. He showed me a pamphlet I had not seen, published in 1943 by the “Polish Labor Group” which was based in New York but in touch with the Polish underground. Its title was appropriate: Oswiecim – Camp of Death (“Oswiecim” is Polish for “Auschwitz”). The pamphlet presented the truth with some embellishment, but what was important to Graham was that it did not speak of “exterminations” in any way reconcilable with the legend. He let me borrow the pamphlet to photocopy.

Volume 10 of Actes et documents was long delayed, and I wrote to Graham several times in my eagerness to see it. When publication finally came in 1980, Graham was thoughtful enough to alert me personally. I got a copy and found references to more interesting but unpublished documents. Again I wrote to Graham and happily, this time, my request was filled.[3]

At the IHR Conference in 1982, I compared the Holocaust legend to the Donation of Constantine, and sent Graham a copy of the paper. In the paper I had noted that the Jewish historian Walter Laqueur understood as I did “that the far-flung nature of the operations of the Catholic Church guaranteed that the Vatican would have known what was happening to the Jews.”[4] Graham acknowledged receipt of the copy of my paper with a very kind, respectful and encouraging letter, referring to and not disputing the remark about the Vatican. He only complained that Laqueur was, without foundation, accusing his group of suppressing relevant documents. That letter from Graham is reproduced here.

I always knew that there was an honest and honorable man editing the publication of the Vatican documents.