For Email Newsletters you can trust
Contribute
Donate Now!
other ways to contribute »
Popular items
About the Author
Angela Schneider
No description available.
Why not help out and contribute one?
Featured documents
Search the Library
Advanced Search

The “Death Marches” that Saved Lives 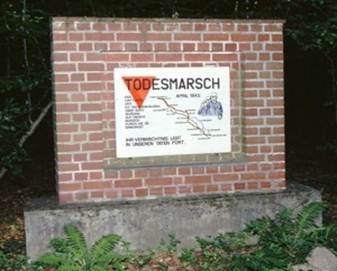 Commemoration Plaque in Germany about “death marches” at war’s end.

In late 1944 with Soviet Forces rapidly advancing on Germany from the east, the German authorities in AMT D in Oranienburg who were responsible for the concentration camps, ordered the camp commandants in the countries east of Germany to gather as many prisoners as were mobile, issue them rations, and evacuate them to camps in Germany.

All available trucks and trains being involved in the German defense against advancing Soviet forces, the SS were forced to march the prisoners west.

The Jewish author Elie Wiesel who was a prisoner in Auschwitz at that time describes how he, on receiving orders to prepare for evacuation, rushed to the Auschwitz camp hospital to make sure his sick father was not left to be liberated by the Russian forces but was taken off on the “death march” with the “murderous SS.” (Strange but true)

The prisoners (and the SS) marched for days, freezing and with only the food they could carry, those that fell and could or would not go further, were shot. This sounds very callous, but in reading that we need to keep in mind following:

Even today there are memorials all over Germany commemorating these so-called “Death Marches.”

In Belower Wald (Below Forest) in North Germany, where thousands of prisoners were forced to bivouac overnight on the ground, many prisoners carved their initials or signs into the trees.

Exactly where they got the sharp instruments, or the energy, to do the carving, is a mystery. 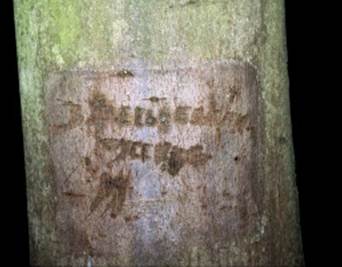 Tree carvings in the Below Forest, Northern Germany

With the passage of time many of the carvings are being lost as the trees continue to grow, but the tourist can still see the evidence and scale of the large area the prisoners and their guards filled in the forest.

These marches are today known as “Death Marches” and the “official” history books still tell us that the Nazis forced these prisoners to march west because, even in the late stages of the war, they were not willing to do without their “slave laborers.”

However, hidden away in the archives of the Franklin D. Roosevelt library in Hyde Park New York lies the true story of why these thousands of prisoners were marched off from Poland, Czechoslovakia, Hungary, etc to Germany.

The factual story of these so-called Death Marches shows that the German authorities did it because it was “requested” of them by the Allies.

In September 1944 the Polish Prime Minister in exile S. Mikolajczyk, on hearing that survivors of the Warsaw Rebellion were to be imprisoned in Auschwitz, began claiming that the “Beast” (as he called the Germans) was intending to murder all concentration camp prisoners before they retreated westwards.

On October 12, 1944 the German authorities, in an effort to quell the rumors, issued official press reports denying that they were murdering or intending to murder prisoners in the camps.

By November 1944 Jewish and Polish sources in London were pushing to have the Allied air forces bomb Auschwitz.

On November 18, 1944 Assistant Secretary of War John J. McCloy wrote to John K. Pehle of the War Refugee Board explaining that the U.S. government had decided not to bomb the camps because the bombing would require precision bombing and the aircraft needed for such bombing did not have the range capacity. The use of heavy bombers would endanger the prisoners unnecessarily.

In December 1944 the American Embassy in Bern (Switzerland) bought forward two “intelligent Jewish women” (US description) who had escaped one evacuation transport from Auschwitz and made it through to Switzerland, and these women had willingly testified to the Americans that the Germans were not murdering prisoners in Auschwitz, there were no indiscriminate shootings and most of the deaths in the camps were caused by malnutrition, disease and illness.

On January 22, 1945, German authorities reported to the Irish Department of External Affairs that all rumors of “mass exterminations” or murders were devoid of all foundation and that they were actually trying to keep the prisoners alive.

The U.S. State Department then contacted the German authorities through its consulates in Ireland and Switzerland and informed them that America had taken notice of this assurance, and expected that all inmates of all concentration and work camps would be kept alive by the German authorities.

The only way the German authorities could keep this promise when retreating, was by evacuating the prisoners west to Germany, and away from the Russians.

Unfortunately the German promise could not cover what foreign troops might do to the prisoners, as was the case where the German authorities on their retreat, left Polish militia troops guarding Auschwitz camp, and the Poles, on noticing the arrival of Russian troops, set about shooting the remaining prisoners.