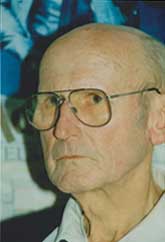 Gerhard Förster, a courageous Swiss publisher of revisionist books, died in his sleep during the night of September 22-23, 1998, in a home for the elderly in Baden, northern Switzerland. He was a co-defendant, with Jürgen Graf, in the “Holocaust denial” trial in Switzerland on July 16, 1998 – the most important legal proceeding so far on the basis of Switzerland’s “Anti-Racism Law.”

At the trial, the 78-year-old Förster was in such poor health that he had to be brought into the courtroom in a wheelchair. He was sentenced on July 21, 1998, to 12 months in prison for bringing out several allegedly anti-Jewish books, including two by Graf, through his Neue Visionen publishing firm. In addition, Förster was fined 8,000 Swiss francs ($5,500). The court also ordered him to turn over 45,000 francs earned from book sales. (See “Swiss Court Punishes Two Revisionists,” July-August 1998 Journal, pp. 2-12).

Förster was a retired electrical engineer who held several dozen patents. He was born in Silesia, Germany, and served briefly during the Second World War as a private in the regular German army. His father perished, along with some two million others, in the flight and genocidal expulsion of some 12–14 million ethnic Germans from central and eastern Europe, 1944–1948. Förster moved from Germany to Switzerland in 1957, and had been a Swiss citizen for many years. His wife died before him.

All books of Förster’s Neue Visionen publishing firm are now distributed by, and available from, the Foundation for Free Historical Research in Flanders ([... address invalid; please look at CODOH's bookshop for some of those books; ed.]).