Israel’s ‘Knife in the Back’ Attack Against America

go
Here is the text of the open letter by Phillip Tourney, President of the USS Liberty Veterans Association, published in a full-page advertisement in the daily Washington Times, June 6, 2002 (p. A11). 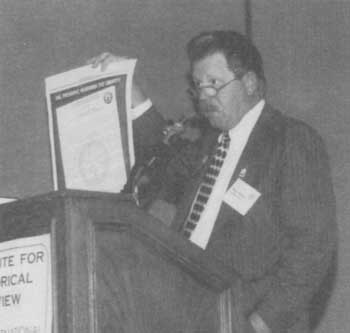 Saturday, June 8, 2002 marks the 35th anniversary of probably the most shameful day in American history. That day America’s banner and honor were treacherously trashed by our so-called ally, Israel. Thirty-four Americans were brutally slaughtered, 172 wounded, including myself. America’s most sophisticated intelligence ship was so badly damaged it had to be scrapped. Israel deliberately attacked America’s virtually unarmed USS Liberty in international waters, knowing full well our identity, in an assault that lasted as long as the attack on Pearl Harbor.

On that bright, sunny, infamous day, the Liberty had a large American flag flapping in the wind and ten foot high I.D. markings on her hull, which were clearly visible during the full six hours (6:00 a.m. to 12:00 noon) that low-flying, slow-moving, propeller recons, distinctly marked with Stars of David, reconnoitered our ship. Overheard radio transmission of the pilots confirmed that the Israel had positively identified the Liberty as American.

Suddenly at 2:00 p.m., the government of Israel put a knife in the back of America. In a diabolic attempt at deception, the Israelis began the attack with unmarked jet fighters using rockets, cannons, and napalm on our unprotected ship. Then three motor torpedo boats arrived on the scene and fired six torpedoes at us, one hitting its mark, midship on the starboard side, instantly blowing to bits 25 of America’s finest young men. The torpedo gunmen shot at our firefighters and stretcher-bearers, using us as target practice, maiming and murdering as many of America’s sons as they could. 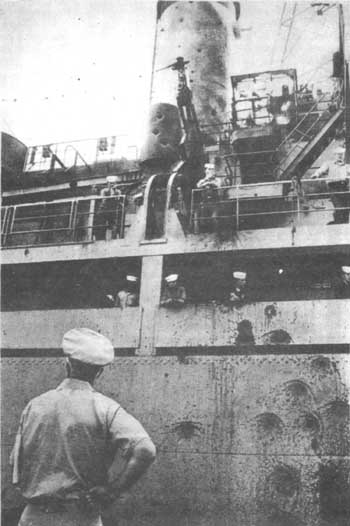 The "USS Liberty" a few days after the June 8, 1967, attack by Israeli war planes and torpedo boats. Although it was flying a large American flag, the US Navy intelligence ship was repeatedly attacked by Zionist forces, killing 34 and wounding 172 of the crew of 294. The vessel was scarred by napalm, a torpedo explosion at the water line, 3,000 armor-piercing bullets, and 851 rockets. Israeli machine-gun fire destroyed the ship's life rafts.

The captain ordered us to prepare to abandon ship, as the ship was in grave danger of sinking from a torpedo hit that left a 40 foot by 40 foot hole in her. There were only three life rafts left that they hadn’t already destroyed. We put them over the side to put as many wounded in as possible. The torpedo boats machine gunned the life rafts and sank two of them and took one aboard their boat – no survivors were to be taken! Helicopters were overhead to board our ship with Israeli commandos at the ready to finish us off.

Responding to an S.O.S. from the Liberty, the USS Saratoga launched their jets approximately 15 minutes into the vicious Israeli attack. Within minutes after the launch, incredibly and inexplicably, Washington shamefully and unconscionably recalled the jets, abandoning helpless American sailors under fire, and subjecting them to an additional two hours of barbaric Israeli bombardment and butchery.

Fortuitously, when the Israelis picked up an invalid message that U.S. help was on the way, Israel reluctantly was forced to terminate its ongoing assault. Without that break, I would not be alive writing this letter.

Ironically, help did not arrive until 18 hours after the attack, when it was only 15 minutes away. When an American rescue ship finally arrived, what they found was shocking: the Liberty was in shambles, death on the water. There were 821 rocket and cannon holes in her hull, thousands of 50 caliber armor-piercing bullets riddling her skin, a tunnel size torpedo cavity in her broad side, and the residue of napalm that had been dropped to burn us up. Blood and body parts were strewn across the deck. A sad, outrageous story, but unfortunately true.

The crew of the most decorated naval ship in American history was ordered to remain silent under threat of court martial, imprisonment or worse, and we all knew what worst meant. The U.S. government has never challenged the obviously phony Israeli excuse of “mistaken identity,” nor have they attempted to expose the dishonorable cover-up that continues to date. Truth and America’s honor were ignominiously sacrificed to provide cover for Israel’s transparent lies and despicable act of perfidy.

Israel’s premeditated, sneak attack on the USS Liberty was a direct attack on America. The disgraceful refusal of unpatriotic American governmental officials of dubious allegiance to defend America and come to the aid of brave Americans under attack can only be characterized as treasonous.

Mr. President, on behalf of the courageous crew of the USS Liberty, dead and alive, I respectfully request that you commission a presidential panel to finally investigate the attack and cover-up of the USS Liberty, and report the truth to the American people.