Ivor Benson – author, journalist and current affairs analyst, and a good friend of the Institute for Historical Review – died in mid-January in a small market town in West Suffolk, England, where he and his wife had lived for nearly eight years. He was in his 86th year. 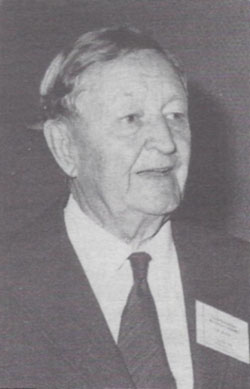 Ivor Benson at the 1990 IHR Conference

Benson was born of Swedish parents in November 1907 in South Africa (Orange Free State), and grew up in South Africa and Rhodesia (now Zimbabwe). His writing career began as a teenage reporter with the Natal Mercury in Durban (South Africa). After work for the London Daily Telegraph and the Daily Express, he became chief assistant editor of the Johannesburg Rand Daily Mail, then South Africa’s leading morning paper. He resigned that post because of what he regarded as the paper’s entrenched misrepresentation of truth. He also served as assistant editor of the Sunday Tribune in Durban.

During the early months of the Second World War, he worked as a freelance journalist in Poland, Finland and Sweden. He left Norway just ahead of the occupying German forces. After returning to South Africa to enlist, he served with distinction as an officer under British command in tank and armored car units in north Africa and Italy.

In 1960, he was the last journalist to leave the embattled Congolese city of Elisabethville (now Lubumbashi). His exclusive first-hand reports on the chaos and bloody fighting there appeared in newspapers around the world. In 1963 he delivered a series of acclaimed weekly broadcasts of news analysis and commentary over the South African Broadcasting Corporation. Then, from 1964 to 1966, he served as Information Advisor to the government of Rhodesia (then headed by Ian Smith).

For most of the rest of his life, he was an independent political analyst and commentator on world affairs. For 15 years until his death, he wrote and published Behind the News, a courageous and well-written monthly newsletter that enjoyed an influence out of all proportion to its modest circulation.

He traveled widely and lectured on four continents, including several speaking visits to the United States. He spoke at the Seventh and Tenth IHR Conferences in 1986 and 1990. (These presentations are available on audio tape. The 1990 lecture is also available on videotape.)

Benson’s articles in The Journal of Historical Review include “The Siege of South Africa” (Spring 1986), “Iran: Some Angles on the Islamic Revolution” (Summer 1989), and “Russia 1917–1918: A Key to the Riddle of an Age of Conflict” (Fall 1990). He wrote several books, including The Battle for South Africa and The Zionist Factor. (The revised 1992 edition of The Zionist Factor is available from the IHR.)

As forthright as he could be in print, in person Benson was invariably kindly and courteous. A devout Christian, he was widely regarded as a man of exceptional character, serenity and integrity. Shortly after his death, his devoted wife Joan commented:

When Ivor was a young man of about 23 years, he experienced an illumination of the heart and mind, a vision of Truth, which was to guide and stabilize the whole of his long and fruitful life.

Ivor knew the Truth, and this was the inner light which made him a wholly integrated personality. It gave him a special strength and self-discipline throughout his professional work and in all his relations with nature and other people.

By the grace of God, Ivor Benson always fought the good fight, and ran the course to the end.

Over the years, he stayed in close touch with the IHR. In a steady stream of letters, he provided many helpful suggestions and steadfast encouragement, even during the IHR’s most difficult periods. His last letter to the Institute was written just a few days before an emergency heart operation from which he did not regain consciousness.

Along with many others around the world, all of us at the IHR will remember Ivor Benson as a good friend and a gentleman of exceptional insight and character.