With an estimated eight to eleven million viewers, "Donahue" is one of America's most popular television talk shows. Thus, the recent appearance of revisionist activists Bradley Smith and David Cole on this show, each of whom made some very effective points, is a major media breakthrough for Holocaust revisionism.

The session was taped on March 14, and broadcast in some places that same day. In many large cities, including Los Angeles, New York and Chicago, it was aired on March 21.

As viewers were shown archival film footage of German wartime concentration camps, headlines from American campus newspapers, and scenes from the movie "Schindler's List," the show was introduced with a pre-recorded report, narrated by Donahue. He announced: 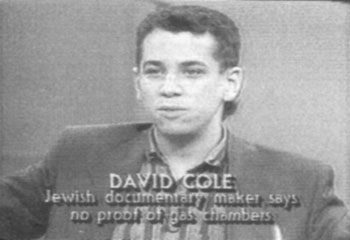 David Cole on the "Donahue" Show

In just the last six months, 15 college newspapers across the country have run advertisement that call for a, quote, open debate of the Holocaust, unquote. The ad claims that the United States Holocaust Memorial Museum in Washington, DC, has no proof whatever of homicidal gassing chambers, and no proof that even one individual was gassed in a German program of genocide. The ads have caused an uproar everywhere, sparking protests from students and boycotts of the papers.

The man who placed all the ads, Bradley Smith, has been called anti-Semitic and a neo-Nazi because of the challenges of the Holocaust. Smith claims he simply wants the truth to be told, that Jews were never placed in gas chambers and that the figure of six million Jewish deaths is an irresponsible exaggeration.

Then came a misrepresentation that is, unfortunately, all too typical of the American media: an on-screen caption identified Smith as a person who "places ads in college newspapers calling Holocaust a hoax." Even after he protested this characterization – and explained that "nobody says the Holocaust never happened," and that the text of his ad begins by specifically declaring "this ad does not claim 'the Holocaust never happened'" – Donahue neither apologized nor addressed Smith's objection. 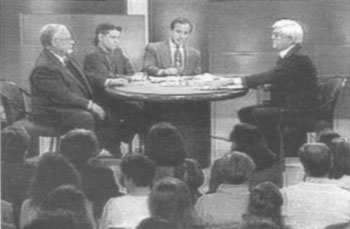 Donahue repeatedly tried to involve Smith in a discussion of anti-Semitism, stressing the suffering of Jews during the Second World War. Smith responded by attempting to return to the subject of his campus ad campaign, and then added, with some exasperation: "There's a moral issue here. Are Jews more important in the murder and chaos that went on during World War II than all other human beings in Europe?"

Probably the most striking and substantive portion of the broadcast was David Cole's presentation, with apt commentary, of video film he recorded during visits to the former German camps of Auschwitz-Birkenau, Mauthausen and Majdanek.

As Cole's video tape clearly shows, the door of the alleged execution "gas chamber" at Majdanek where the Nuremberg Tribunal declared that 1.5 million people had been killed – "latches only from the inside," and "opens into the chamber." Cole went on to observe:

If you're going to pack a thousand people in a room and kill them, you can't have a door that then opens into the room because they will be piled up against the door, where they died. And I am now showing that the latches of this door, they latch inside. You cannot lock somebody into this room.

Donahue's only response to this footage, which will be included in his forthcoming second video production, was a dismissive comment: "Okay. Well, you're a real Columbo, David."

In an effort to discredit him, Donahue made much of the fact that Cole had met Ernst Zündel, who was called a "neo-Nazi." With a remark that provoked one of the show's rare moments of humor, Cole responded: "I'm sorry, Phil. This is not about who I've met in my life. I just met you. Does that mean I'm Marlo Thomas [Donahue's wife]?"

Dr. Michael Shermer, adjunct professor at Occidental College in Los Angeles and editor-publisher of Skeptic magazine, appeared a little later in the broadcast. Although he was characterized as a "Holocaust historian," he actually has no special knowledge or expertise on this subject. His job, as far as Donahue was concerned, was to "vigorously" refute Smith and Cole. He didn't succeed.

As part of his attempt to defend the Holocaust gas chamber story, Shermer referred to "all the evidence that we have. For example, why do we have so many huge orders of Zyklon B?" This comment entirely ignores the fact that the detailed records of orders for Zyklon B show that the widely-available commercial pesticide was delivered to camps where it is universally acknowledged that no homicidal gassings ever took place in quantities just as large as for camps where it is claimed that hundreds of thousands of Jews were gassed.

As "proof" that Jews were "gassed," viewers were shown a film clip of the infamous "gas chamber" at the Dachau concentration camp. (This was the very same footage that was shown to millions of "60 Minutes" viewers.) Cole quickly pointed out that this film footage is fraudulent because, as every serious historian of the subject now acknowledges, no one was ever "gassed" at Dachau. Prodded by Cole, Shermer acknowledged (to Donahue's obvious consternation) that this "gas chamber" was never used to kill anyone. However, Shermer attempted to negate the significance of this fraud by asserting that "it doesn't matter."

Another moment of embarrassment came when a "Holocaust survivor" in the audience loudly insisted that the Germans manufactured lamp shades and bars of soap from the bodies of murdered Jews. "It was true!," she exclaimed. Even after Cole and Smith were able to get Shermer to acknowledge that the often-repeated "human soap" tale (supposedly "proven" at the Nuremberg Trial) is not true, rude "survivors" in the audience continued to insist on it. Rebuking Shermer, who clearly didn't know how to handle this awkward situation, two elderly "survivors" shouted: "He wasn't there!" It was at about this point that an obviously embarrassed Donahue decided that this would be an appropriate moment to cut for a commercial break.

to his credit, Donahue affirmed that Holocaust revisionism can no longer be ignored, but must be dealt with seriously, and in a spirit of intellectual freedom. "In my opinion," he said, the media can "no longer continue to ignore" Smith and his revisionist campaign. Donahue called for "a stand-up debate with this man," and said to Smith: "I believe there should be intellectual freedom on this issue. That's why you're on the program."

The generally effective appearance of Cole and Smith on "Donahue," along with the treatment of Holocaust revisionism on other widely-viewed television programs, affirms that this intellectual movement has, at last, become an acknowledged feature of America's social-cultural landscape.