In my book Faked Atrocities (distributed by the Institute for Historical Reivew, [new title: Forged War Crimes Malign the German Nation; for current availability see here; ed.]) I have described some of the ways in which the German nation is maligned through the use of forged atrocity photographs. My book deals comprehensively with this problem, and shows the following:

In the examples I am today presenting, I wish to show some of the more blatant forgeries. Of course, there were other methods, besides forged photographs, used for brainwashing the German people after the war. For a survey of these, students should refer to my more recent booklet The Methods of Re-Education (also distributed by IHR, $2.00 [no longer; ed.]). 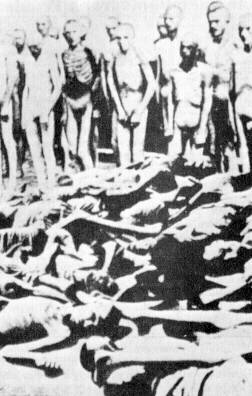 This was the caption given to this picture in R. Schnabel's "Macht Ohne Moral" (Power Without Morals), Roederberg Publishing, Frankfurt, 1957, page 341. 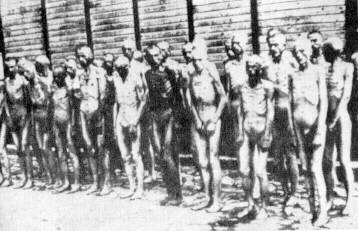 This is the caption given to the same picture, but minus the pile of bodies, at the Nürnberg Trials. The photograph appears twice; once in Vol. 30 page 421, and again in the French government's submissions as document F321.

It was also reproduced in a number of Communist booklets, such as Der KZ-Staat (The Concentration Camp State) by Heinz Kuehnerich, East Berlin, 1960, page 81; and in Vaclav Berdych's Mauthausen, Prague, 1959.

This photographic fraud is also commented upon by Richard Harwood in Six Million Lost and Found (previously Did Six Million Really Die?) 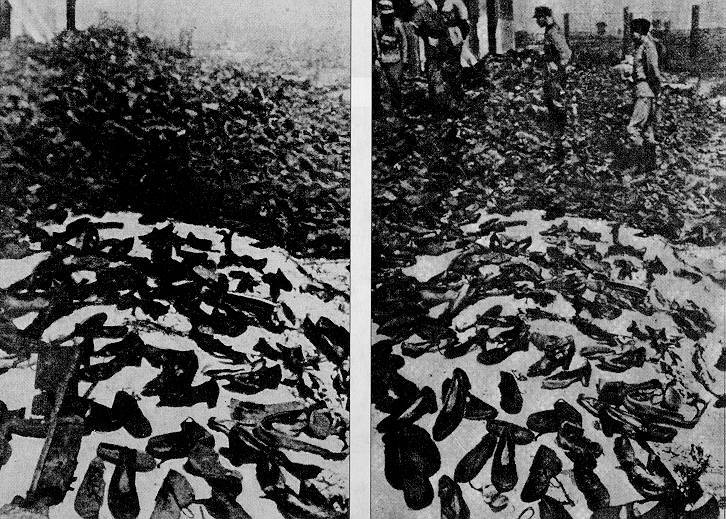 Thousands of Shoes of Murdered Prisoners at Auschwitz

This picture appeared with no caption at all in "The Lublin Extermination Camp," by Constantin Simonow, Moscow, 1944, page 12.

One would wish that the Exterminationists would at least get their stories straight. Were the shoes found at Auschwitz or at Lublin? (Actually, it is also worth noting here that Lublin is the same thing as Maidanek or Majdanek, but is a hundred miles from Auschwitz-Birkenau.)

In both photographs one can see that the individual shoes in the foreground are identical, yet there are two different backgrounds. Also, there are no shadows in the picture, making it seem likely that it has been "touched up." One also wonders why it is that the ultra-efficient Nazis allowed their victims' shoes to be piled up without being tied in pairs. We are indebted to an Exterminationist-Survivor Eugen Kogon who told us in Der SS Staat (The SS State), 1st edition on page 132, or 5th edition on page 167, that there was a big sign in front of the gas-chamber undressing room telling the victims to fold their clothes neatly and tie their shoes in pairs! 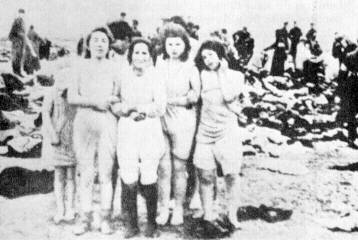 The terror in the occupied areas had as first aim: the extermination of the Jewish population and the intimidation of all residents who did not subject themselves completely to the regime. The Gestapo brought women and children to be shot.

This same picture also appears in Der Gelbe Stern (The Yellow Star) by Gerhard Schoenberner, page 96 in both German and English editions (Corgi-Trans World 1969), with the caption Mass Executions in Lijepaja, Latvia. 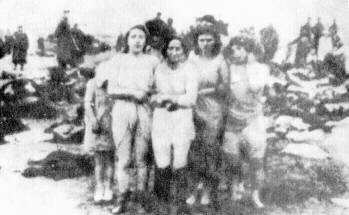 A group of women before being shot. On the left of the picture is Purve Rosa, worker from the Kursa factory, and her mother next to her. Photograph from the chief of the Gestapo unit in Ljiepaja, Hauptscharführer Karl Schrot, 15 December 1941.

Although on the face of it, this may seem to be the same picture, study for a moment the garments the women are wearing. Woman #2 in the German picture has an undershirt that comes up to her neck. Yet the same woman in the Soviet picture has a scoop-neck garment. Woman #3 has a V-neckline in the German picture, and a rounded neckline in the Soviet one! Woman #4 and Woman #1 have also had their necklines altered. One must also speculate on how it is that people can stand around so calmly in their underclothes in Latvia in the middle of December when temperatures are minus 40 degrees Centigrade!

But such is the standard of our popular media that they will recycle such trash as this with impunity. The Soviet photo later appeared in the popular Stern magazine, and their caption told that the scene was now White Ruthenia! 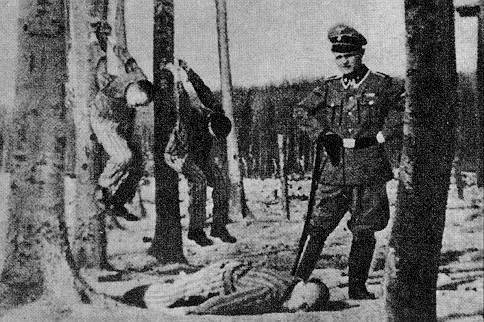 This was the caption in Der Spiegel 10 October 1966 page 101. The same picture was also used on postcards with the slogan: This War Criminal Has Not Been Found! which were distributed by American Zionist organizations in the Spring of 1979. The cards were to be mailed to the German prime minister demanding an extension of the statute of limitations. The campaign was successful.

However, the picture is an obvious fake. The guard's uniform is all wrong. The side pockets beneath the belt are missing. The buttoned edge of the jacket does not run correctly from top to bottom. The pistol hangs on the wrong side. An "Unterscharführer" would not be allowed to wear officer's pants with boots.

Secondly, the lighting is all wrong. The "guard" and the two hanging victims cast no shadows, while the prone victim does.

Lastly, it would seem terribly inefficient of those wicked Nazis to choose such high trees to hang people from. Someone would have had to have gone to a lot of trouble to get the ropes high up into the crown of the tree. One also wonders whether it is anatomically possible for people hanging by their wrists like this to draw their legs up. Also, one cannot see the ropes; when I visited Dachau museum in January 1968 they had on display a life-size blow up of this same picture, and still no ropes were detectable. Either the victims are floating in mid-air, or someone forgot to draw them in!