Marshall Plan vs. Robbery, Murder, and Destruction? An Eternal Mockery of the Germans!
by Karl Baßler
Published: 2004-05-01

Within the framework of the so-called Marshall Plan, a credit(!) of

was given to West Germany for the years 1949 to 1952. Under the terms of the London Debt Agreement of February 1953, this credit(!) was to be repaid by 1962 to the tune of (taking into account both interest and cancellation)

This repayment of 13 billion DM must be attributed exclusively to the Marshall Plan. According to the London Debt Agreement (February 12, 1953), it was also said to repay so-called "Gario" funds, with which the occupation powers had allegedly provided food aid to Germany during the starvation years of 1945 to 1948. 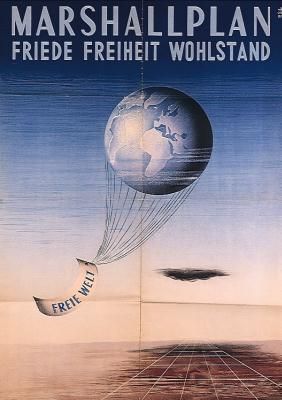 During the years 1945-48 (i.e., before the Marshall Plan), the Western Allies gave West Germany "economic aid" (food) valued at 3.386 billion dollars.[1] At the then current market price for wheat of $60 per ton, this would have been enough to buy 55 million tons of wheat. The Western Zones (later to become the Federal Republic of Germany) had a population of 40 to 45 million. Therefore, 55 million tons would have meant approx. 1,200 kilos (2,650 pounds) of wheat per citizen: a quantity equivalent to 1 kg (2.2 lbs, and roughly 4,000 calories) of wheat daily for each and every German for 3½ years. An additional 1,400 calories per day would still have been available from domestic reserves (Reichsnährstand), which means that every single inhabitant of West Germany should have been able to receive some 5,400 calories per day – the ration of a heavy laborer!

In actual fact, however, only 1,000 to 1,400 calories were available, and these from the reserves still secured by the Reichsnährstand in spring 1945.

So the alleged "Gario" funds never reached Germany. Were they misappropriated to Palestine? Or did they perhaps end up in the bank accounts of American swindlers?

Regardless of this discrepancy, the London Agreement charged this alleged assistance to the Marshall Plan account and the groveling protestations of gratitude, which the current Federal German government published in a full-page article in the August/September 1997 issue of Journal für Deutschland (publ. by Bundespresse- und Informationsamt, the German Federal Press and Information Office), are truly an example of brain-dead nonsense:

"Unparalleled in world history: America's state coffers and supply stores opened up even to the enemy nation Germany, lying as it was in rubble and ashes!"

"Enemy nation"? 4 years after the end of the war? "Lying in rubble and ashes"? Bombed to death by the Anglo-Saxon war criminals! Federal Chancellor Kohl in his speech of gratitude:

There is no other case in world history, the article continued, in which a victorious nation rendered such generous aid to the vanquished and helped it regain a place in the world community:

"West Germany received some 3.3 billion dollars in US aid. In 1953 the USA forgave Germany two-thirds of its debt. The funds thus freed up were used to set up the so-called ERP Fund for further support of the German economy."

So it can be shown that this was an enormous fraud perpetrated by the English and the Americans. Even Ludwig Erhard, Federal Economic Minister in 1949, writes in his book Deutschlands Rückkehr zum Weltmarkt that there are no German receipts for or confirmation of the alleged food aid.

Even as late as spring 1945 (the war wasn't to end until May 8, 1945), the German Reichsnährstand was able to secure rations until fall 1946 – in other words, for one-and-a-half years more – of approx. 1,500 calories per person per day, so it should have been an easy matter for the Allies to counteract any deterioration in the food situation simply by releasing the German productivity. This applied to an even greater extent in the remainder of Europe. Any additional aid (to meet peak demands) would have been necessary only on a small scale and only under extraordinary circumstances.

Marshall Plan Loan Payments to all countries involved. When reading these figures, consider that the German economy is twice as big as the British and French, as well as ten times as big as the Austrian, Greek, and Dutch economies; also keep in mind that Germany was many times more in need of help for recovery .

But in 1945 the Western Allies' boundless, criminal will to destroy had also immediately destroyed the German food supply organization Reichsnährstand.

In the end, this was the chief cause of the disastrous starvation in the years 1946 and 1947, which cost the lives of countless Germans. One must assume that the death toll was at least as high as it had been in 1919, when the British starvation blockade[2] together with a devastating influenza epidemic claimed the lives of 800,000 Germans. But who today still speaks of this deliberate mass murder by the Allied "liberators" ?[3]

In the Federal German budget of 1949, the occupation expenses extorted by the (Western) Allies amounted to 4.7 billion DM. The available amount in aid for social assistance for the 13 million refugees, (10 million of whom had become homeless owing to the Allied terror bombings), for the millions of returning prisoners of war, and for the 40 million West Germans whom the currency reform had robbed of all their savings, was only 3.6 billion DM, augmented by "some 2.34 billion DM for the 4.5 million war-disabled and the widows and orphans of fallen soldiers." In other words: exactly half as much as the occupation expenses! 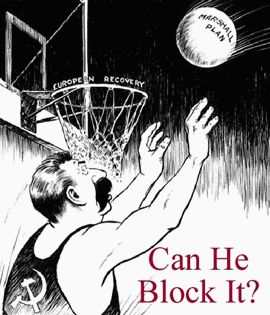 The presence of occupation forces for four and more years after the end of the war was a blatant breach of international law. Occupation forces are a wartime measure; after a war has ended, there is no need for them and therefore no legal justification. Ever since the First World War it was typical of the Allies to forcibly prevent a sensible peace in this way.

Naturally all German post-War governments were too obsequious towards the Allies to demand and enforce international law in this matter either.

The ERP Commission itself had to admit that the pillaging and post-War destruction of Germany by the Western Allies prevented the goal of a German recovery from being attained, and in fact made it impossible. As early as the new year 1946/47, Western Europe (without West Germany!) had again attained the level of industrial production (a decisive economic strength) equal to that of 1938 (1938 = 100). In 1949/50, that is three years later, Western Europe (without West Germany!) had already exceeded this level by 30%: in other words, it reached 130% of the base-comparison year 1938!

This divergent development of Germany and Europe, the five-year (West) German lag, is solely the result of the destruction and looting of the German economy by the Allies.

For this reason it is especially important today, in the age of the complete economic unification of Europe under the Maastricht Treaty, to expose the Allied war crimes that thwarted the German economic potential, and to show how they have ramifications even for the present and future.[5]

That means that, in the same period, 200 times more was stolen from Germany than was given as a loan, repayable with interest! That is the naked truth about the Marshall Plan's so-called aid! In other words, it is nothing but a despicable mockery of the Germans, which West German governments have continued to perpetuate for 50 years.

As recently as May 1997, on the occasion of the 50th anniversary of the Marshall Plan, German Chancellor Kohl wept tears of gratitude. However, West Germany didn't get its first meager hand-out from this Plan until two years after its inception; in other words, Herr Kohl wept two years too early.

Economic Dimension of the Looting and Destruction

The extent of the robbery and destruction is also shown by comparison of the development of the German National Products from1945 to 1952 and 1953 to 1960.

It is most noteworthy that in the four years of the Marshall Plan, the cost of the West German occupation alone amounted to 24 billion DM – in other words some four times as much as the entire Marshall Plan "aid"! To put it another way, in each and every year Germany paid an average of 4 times as much to the Western occupation powers than it received in so-called aid!

If one also adds the occupation expenses paid to the Soviet occupiers, who depopulated and looted East Germany almost out of existence with the consent of the barbaric Western Allies, then from 1949 to 1952, fully 9 times as much was extorted from the German rump state in occupation costs as the entire Marshall Plan "credit" gave Germany in 4 years!

Not even compared to the expenses of German social services was the Marshall Plan of any significance after 1949:

Losses Due to Reduced Productivity of East Germany

The quoted sources estimate a loss of approx. 5.5 billion DM as a result of communist mismanagement. The amount of destruction of material property in East Germany due to deterioration of reproducible material wealth is estimated to be approx. 3.3 billion DM. The next table shows the loss of production capacity as a result of terror bombings and post-war dismantling in comparison with the capacity of 1936, which was considerably lower than that of 1939:

If one extrapolates from European economic growth data of that period and assumes an undamaged production capacity, Germany's economy would have grown as follows:

This level of productivity, which would have been possible had there been no destruction of German economic potentials must be compared with the actual results achieved under conditions of looting, destruction, and suppression: 592.7 bill. DM (cf. Table 6). For the years 1945-52, this meant a loss of productivity of: 1,261.8 – 592.7 = 669,6 bill. DM (corresponding to Table 3; 580 bill. in 8 years!)

This is more than 100 times the Marshall Plan credit to West Germany!

"Without the Marshall Plan Germany would have turned into one giant graveyard, into a vast plain of destruction, brutality, inhumanity, disease and death. [...] Not the USA profited from it, but rather all of Europe – but most of all the German people under the occupation by the Western Allies. In the face of the humanitarian motive, the massive financial and material aid takes on an aspect of nobility. We here in Germany owe a debt of gratitude to our American supporters, for generations still to come."

The West German living standard and investment opportunities were thus deliberately kept at a level of less than 50%.

The effect on the other European nations was proportional; 20% on average, and significantly more for those such as The Netherlands, whose economy was closely interconnected with Germany.[7]

To clear up the misunderstandings disseminated by the German government: Germany – before, during, and after the War, and right to the present day – has always worked in close economic association with the rest of Europe due to her location and history; the European share of her foreign trade amounts to approx. 70%. Thus, every increase in German productivity directly benefits the rest of Europe in the form of a commensurate increase in Germany's foreign trade.

Incidentally, the Marshall Plan also depended to a great extent on this European economic union; with relatively few exceptions, it gave aid only if the recipient would grant special "drawing rights" for its products to other European nations.

In light of these sabotaged economic possibilities, what is the point of the hullabaloo everyone makes over the peanuts that were shelled out under the Marshall Plan?