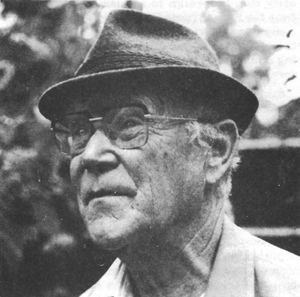 Thies Christophersen – pioneer revisionist writer and courageous fighter for truth in history – died February 13, 1997, at Molfsee, Kiel, in north Germany. He was 79.

In a memoir first published in Germany in 1973, he related his wartime experiences as a German army officer in the Auschwitz camp complex. “During the time I was in Auschwitz, I did not notice the slightest evidence of mass gassings,” he wrote in Die Auschwitz-Lüge (“The Auschwitz Lie”). As one of the first important works squarely to confront the Auschwitz extermination legend, Christophersen’s first-hand account was a major factor in the growth and development of Holocaust revisionism.

“The Auschwitz Lie” caused an immediate sensation in Germany, where it was soon banned. This did not stop publication of German-language editions in Switzerland and Denmark, however, and before long editions appeared in all the major European languages, including several in English. Christophersen predictably came under hostile and mendacious media attack. Numerous newspaper reports, for example, inaccurately referred to him as a former “SS officer.”

Born in 1918, Christophersen worked as a farmer in Schleswig, northern Germany, until the outbreak of war in Europe. Called to military service, he was badly wounded in 1940 while serving in the western campaign. After recuperating and undergoing some specialized agricultural training, he was assigned to a research center in German-occupied Ukraine which experimentally cultivated a variety of dandelion (kok saghyz) as an alternative source of natural rubber, to be produced from the plant’s latex.

In the face of Soviet military advances, and the withdrawal of German forces from Ukraine, the center was transferred to the labor camp of Raisko, a satellite of Auschwitz. During the period he lived and worked there – January to December 1944 – Christophersen was responsible for the daily work of inmate laborers. The young second lieutenant supervised about 300 workers, many of them Jewish, of whom 200 were women from the Raisko camp, and 100 were men from the nearby Auschwitz-Birkenau camp. On a number of occasions he visited Birkenau where, it is alleged, hundreds of thousands of Jews were systematically gassed to death in May-July 1944. Although he knew of Birkenau’s crematories, it wasn’t until after the war that he first heard anything of “gas chamber” killings or mass exterminations.

After the war he returned to farming. A ardent and life-long defender of the interests of German farmers, he also turned his considerable talents as a writer to this cause. For years he edited and published the quarterly magazine Die Bauernschaft (“The Farming Community”), which served as a forum for his straight-forward reporting and forthright and often witty commentary on farming, cultural, historical and current social-political issues. He also ran the Nordwind book service, which distributed a range of works, including revisionist titles.

In March 1988 he testified in the “Holocaust trial” in Toronto of German-Canadian Ernst Zündel. Under oath, he detailed his wartime experiences at Auschwitz, and answered numerous pointed questions by the prosecuting attorney. (His testimony is related in the remarkable record of the trial compiled by Barbara Kulaszka, Did Six Million Really Die?, and in Robert Lenski’s book, The Holocaust on Trial.)

Although he was never prosecuted for his “Auschwitz Lie” booklet, he was put on trial for other outspoken writings. In the 1980s he served a year in prison on charges of “insulting the state” (“Verunglimpfung des Staates”) and “insulting the memory of the dead.”

Driven from his beloved homeland, he was forced to live in exile in Denmark, Belgium and Switzerland. (To its credit, Denmark rejected German requests to extradite him, pointing out that he had a valid residency permit and had not broken any Danish law.) While Danish police stood by, hundreds of “anti-fascist” thugs attacked his modest home in the small town of Kollund, pelting it with stones and defacing it with spray paint. They also severely damaged his book warehouse and, using corrosive acid, ravaged his car and expensive copy equipment. After months of such abuse, in 1995 Christophersen was forced to leave Denmark. Ill with cancer, he sought treatment in Switzerland, but in December 1995 was forced to leave that country. He next found temporary refuge in Spain. Meanwhile, the German printer of his Bauernschaft magazine was fined 50,000 marks.

During his final months, German officials treated him as a virtual “enemy of the state.” His bank account in Germany was closed down, and in early 1996 a German court rejected his application to return to his homeland for a brief visit to attend the burial of a son who had died in a car crash. On the grounds that he had no permanent place of residence, in 1996 German authorities cancelled his state medical insurance coverage and stopped payment of his modest state retirement pension (into which he had paid for 45 years), as well as his military service pension. Christophersen was arrested for the last time a few weeks before his death, but a German judge declared him too ill to be jailed. Released to a son’s custody, he died a few days later.

In an essay about his experiences, “Auschwitz and West German Justice,” published in the Spring 1985 Journal of Historical Review, Thies Christophersen summed up his travails and his defiant but optimistic outlook on life:

When I wrote my [“Auschwitz Lie”] report, I was criticized on the grounds that, although I was in the camp and saw nothing of mass gassings, that fact did not necessarily mean that there were none ...

I have received thousands of letters and calls. Many of those who contacted me can confirm my statements, but are afraid to do so publicly. Some of those are SS men who were brutally mistreated and even tortured in Allied captivity.

I also immediately contacted those who claimed to know more about mass gassings. My experiences were precisely the same as those of French Professor Paul Rassinier. I have not found any eyewitnesses. Instead, people would tell me that they knew someone who knew someone else, who talked about it. In most cases the alleged eyewitnesses had died. Other supposed eyewitnesses would quickly begin to stammer and stutter when I asked a few precise questions.

... Our writings may be banned. We may be thrown into prison. Our mail may be inspected. We may be attacked with fire and bombs. Our homes may be searched. We may be kept from obtaining employment or fired from our jobs. We may be slandered, ridiculed and persecuted like the early Christians. But we will suffer and endure it all, and our enemies will thus achieve precisely the opposite of what they intend. Their actions make others interested in what we do. I believe in truth and justice, and I know that one day they will prevail.